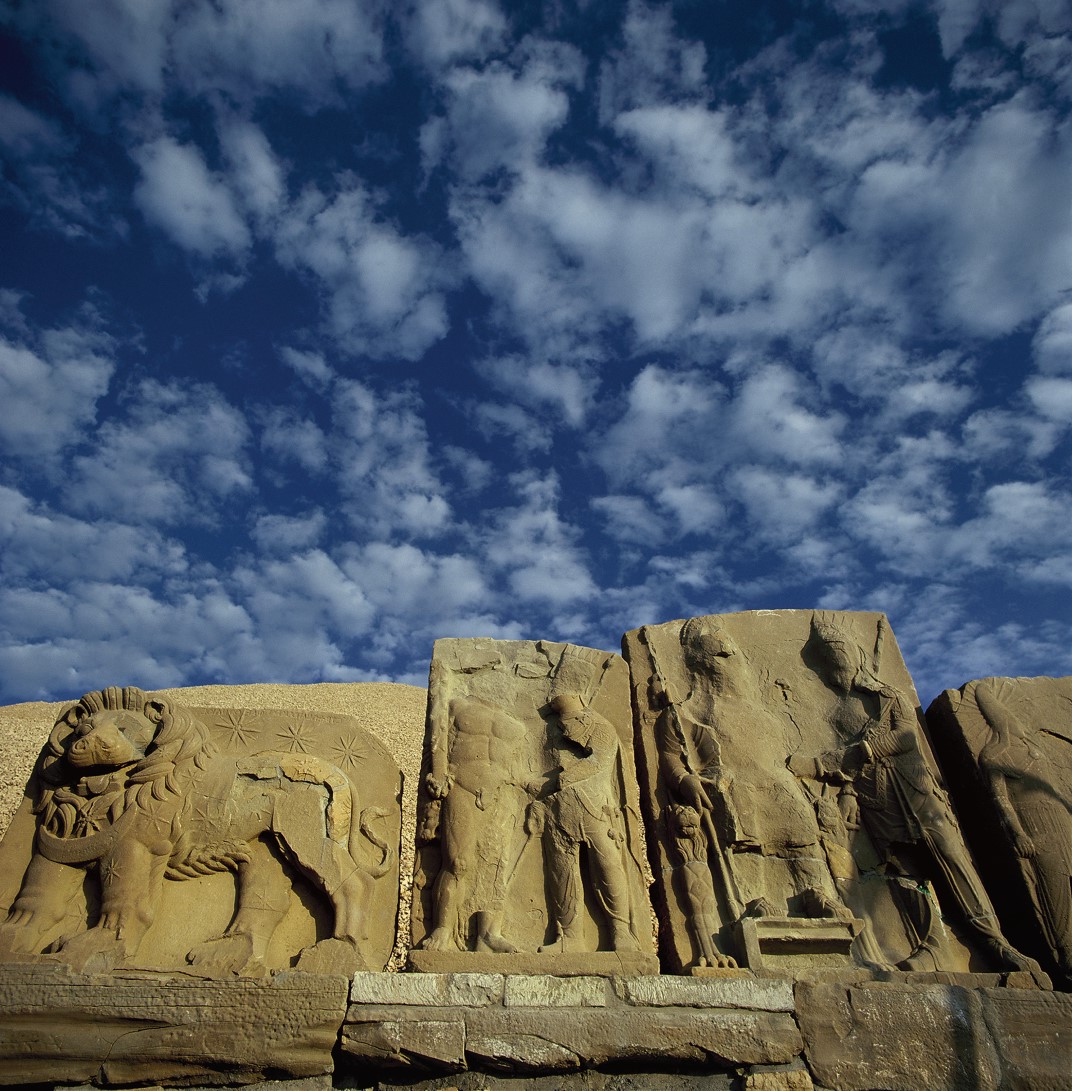 Mount Nemrut of Adıyaman is fabulous both at sunrise and sunset, with statues of ancient gods whispering into your ear to wow you.

Adıyaman has been the stage for a number of civilisations and the location for many culturally important cities. The Archaeological Museum houses regional finds from the Lower Fırat which date from the Neolithic and Chalcolithic ages. The ruins of an Abbasid citadel (restored by the Seljuks) and the 14th-century Ulu Mosque are among the other historical sites that are well worth seeing. High-quality kilims (rugs) woven in bright colours sell for reasonable prices in the bazaar there. 5km to the north is Pirin (Perre) that boasts a large Roman necropolis dug out of the rock and soil. The Haydaran rock tombs and a relief of King Antiochus shaking hands with the sun god can be seen in the village of Taşgedik, 17km north of Adıyaman.

The province of Adıyaman is a must see with its cultural assets, natural beauty, historic richness and Mount Nemrut, which was inscribed on the UNESCO’s World Cultural Heritage List.

Adıyaman and Kahta make good bases from which to visit Nemrut Dağı (Mount Nemrut) National Park as both have good accommodation and camping facilities and you can hire transportation in either town. At the summit of Nemrut Dağı colossal statues of divinities salute sunrise each and every morning. Referred to as the eighth wonder of the world, this gigantic funerary sanctuary was erected in the first century BC by King Antiochus I of Commagene and dotted with 10m-high statues of deities made of cut stone and the pyramid shaped tomb of the king himself. The engineering involved continues to amaze visitors when seen for the first time, making them question how the stones were moved to an altitude of 2206m.

At ancient Eskikale (Arsameia of Nymphaios), a magnificent relief in the ruins of what scholars believe might have been the Commagene Palace depicts Hercules greeting King Antiochus. Anatolia’s largest Greek inscription is located here. Opposite to this site, separated by the Eski Kahta River are the remains of Yenikale (New Castle) built by the Mamluks. Other nearby sights include the secondcentury Roman bridge at Cendere (which is still in use) and another Commagene royal tumulus, Karakuş. Among the ruins at Karakuş, there is a 9m-high pillar with an eagle on top dating from the first century BC.

Mount Nemrut can be found in southeastern Turkey, 40km north of Kahta near Adıyaman, standing at a height of 2206m. It is most notable for the gigantic statues located at the 1st century BC tomb on its summit-a sanctuary built by King Antiochus I of Commagene – with the engineering of the construction continuing to amaze visitors when seen for the first time.

The colossal statues of Apollo, Zeus, Hercules, Tyche and Antiochus rest on terraces that flank the artificial tumulus and a ceremonial road of approximately 180m connects the eastern and western terraces, lined on both sides with incomplete statues and stele. The eastern terrace, where 10m statues of gods sit on their thrones facing the sun, is accessed by steps carved in the bedrock and on one end of the line of statues stands the protective lion representing the Commagene Kingdom’s dominance over the Earth. At the other end, there is a protective eagle representing the dominance of the kingdom over the sky. King Antiochus himself sits next to the statues of the gods; by placing his statue together with the mighty gods he symbolizes the two civilizations – Macedonia from his mother and Persia from his father. Sunrise makes a deep impression with visitors at this particular spot on Mount Nemrut, with its magnificent scenery set against the background of the landscape of nearby hills and mountains. 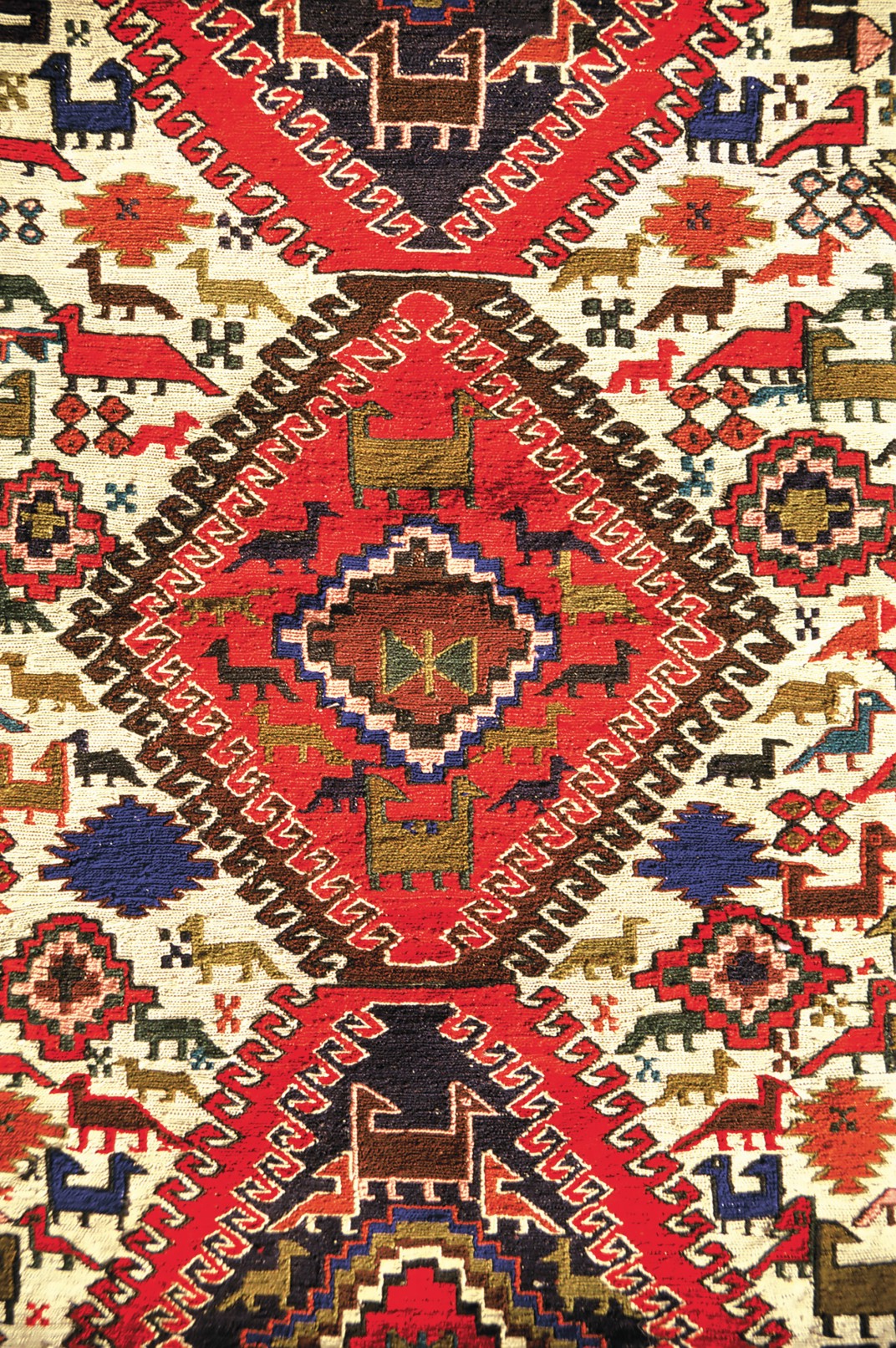 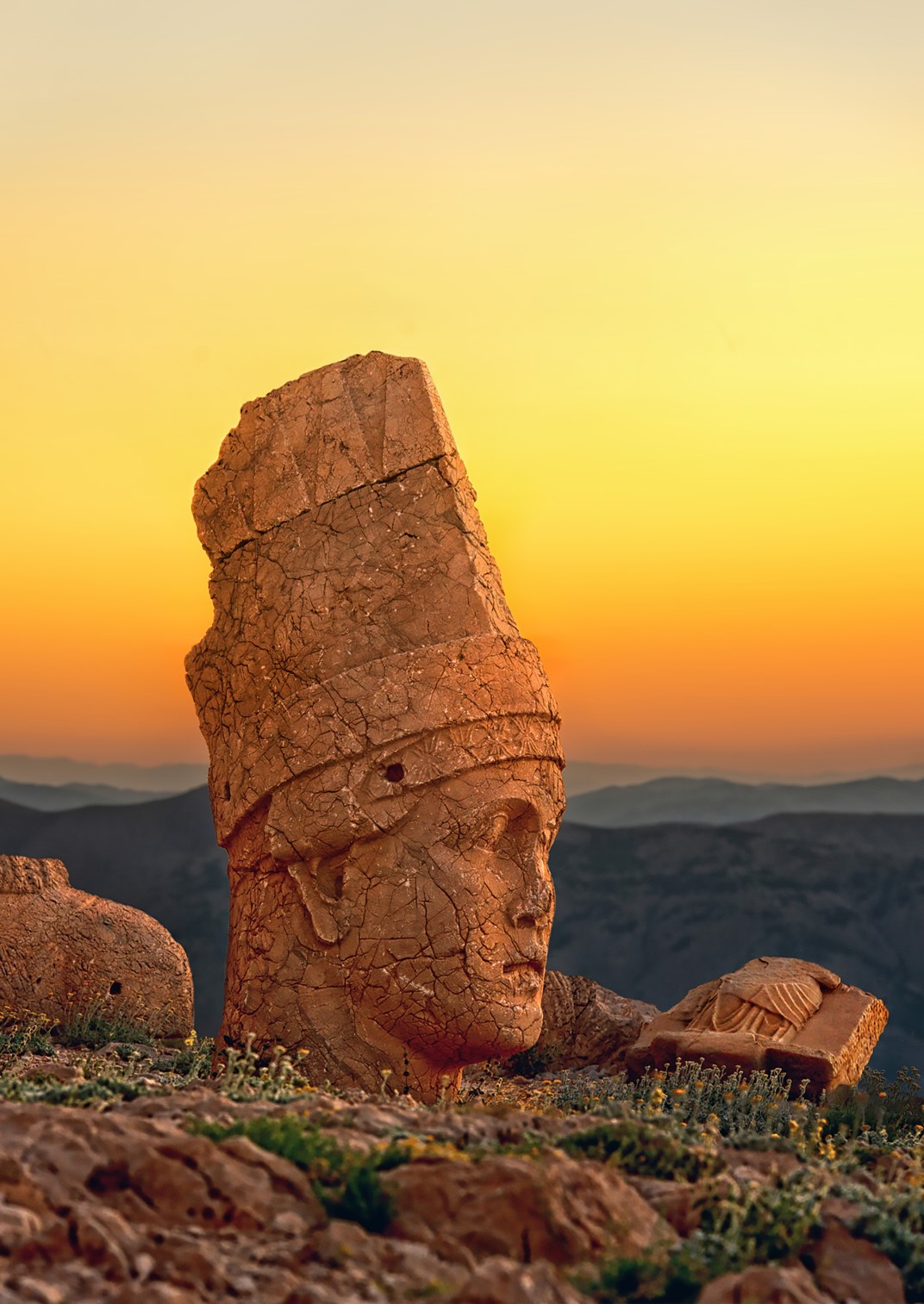 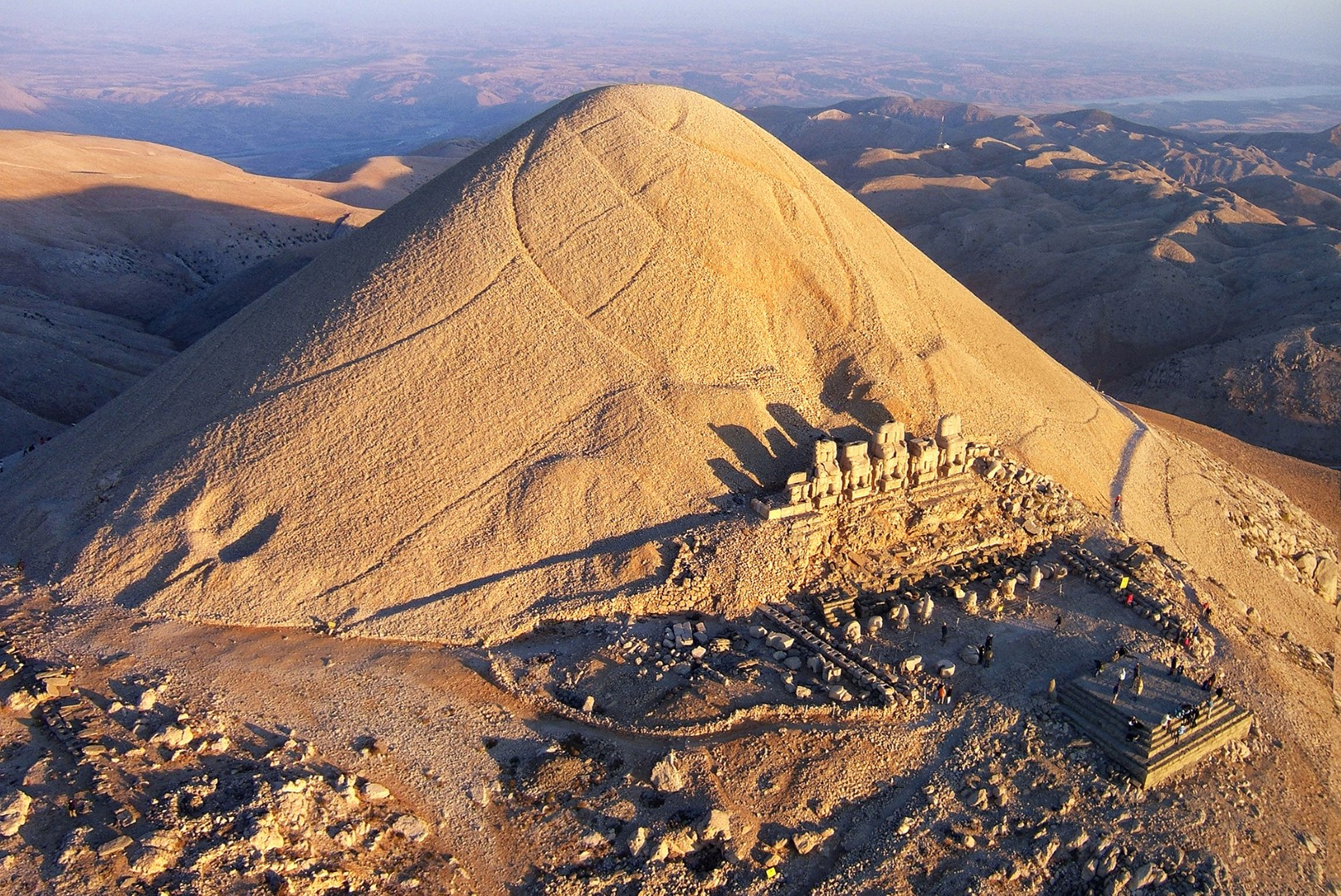 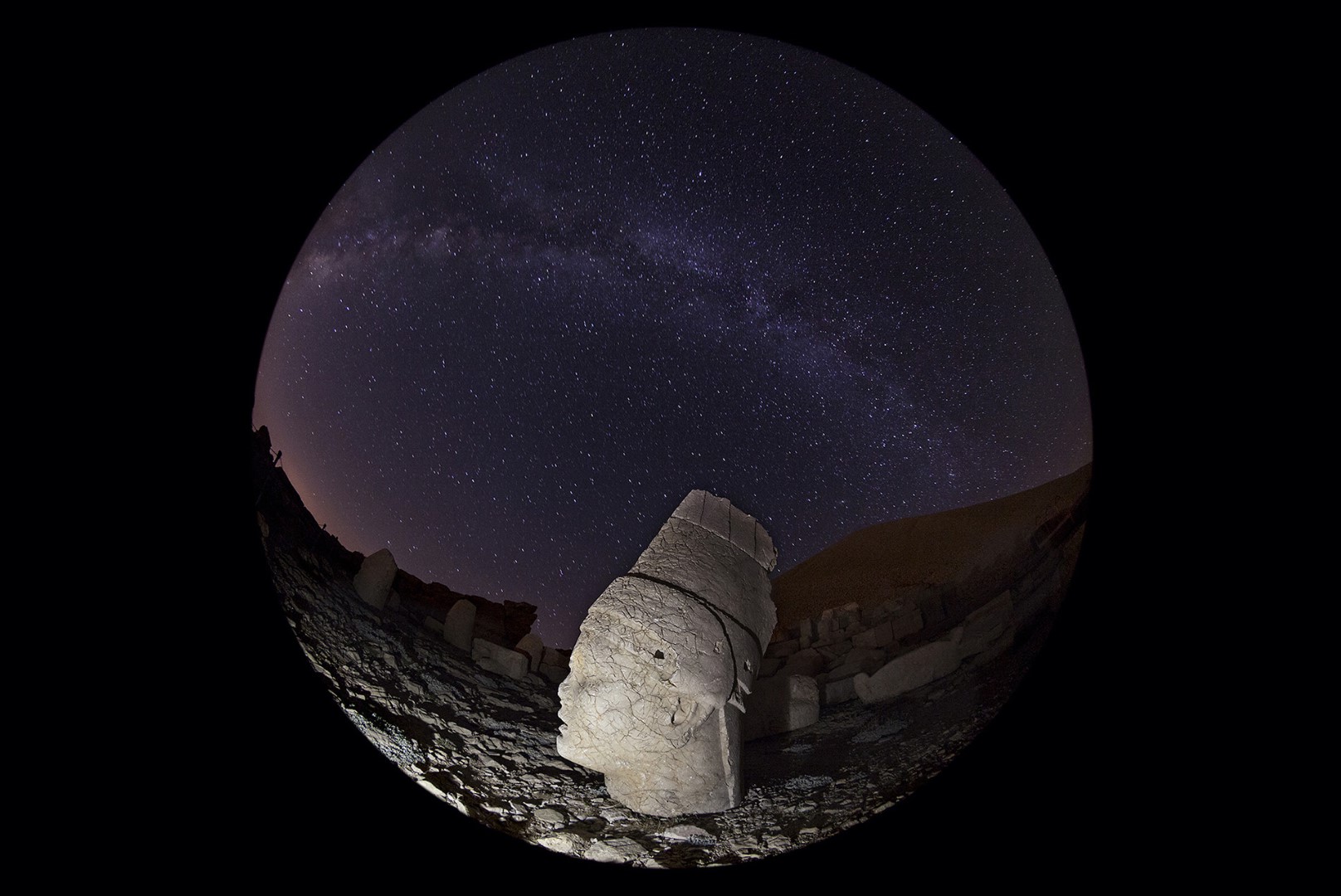 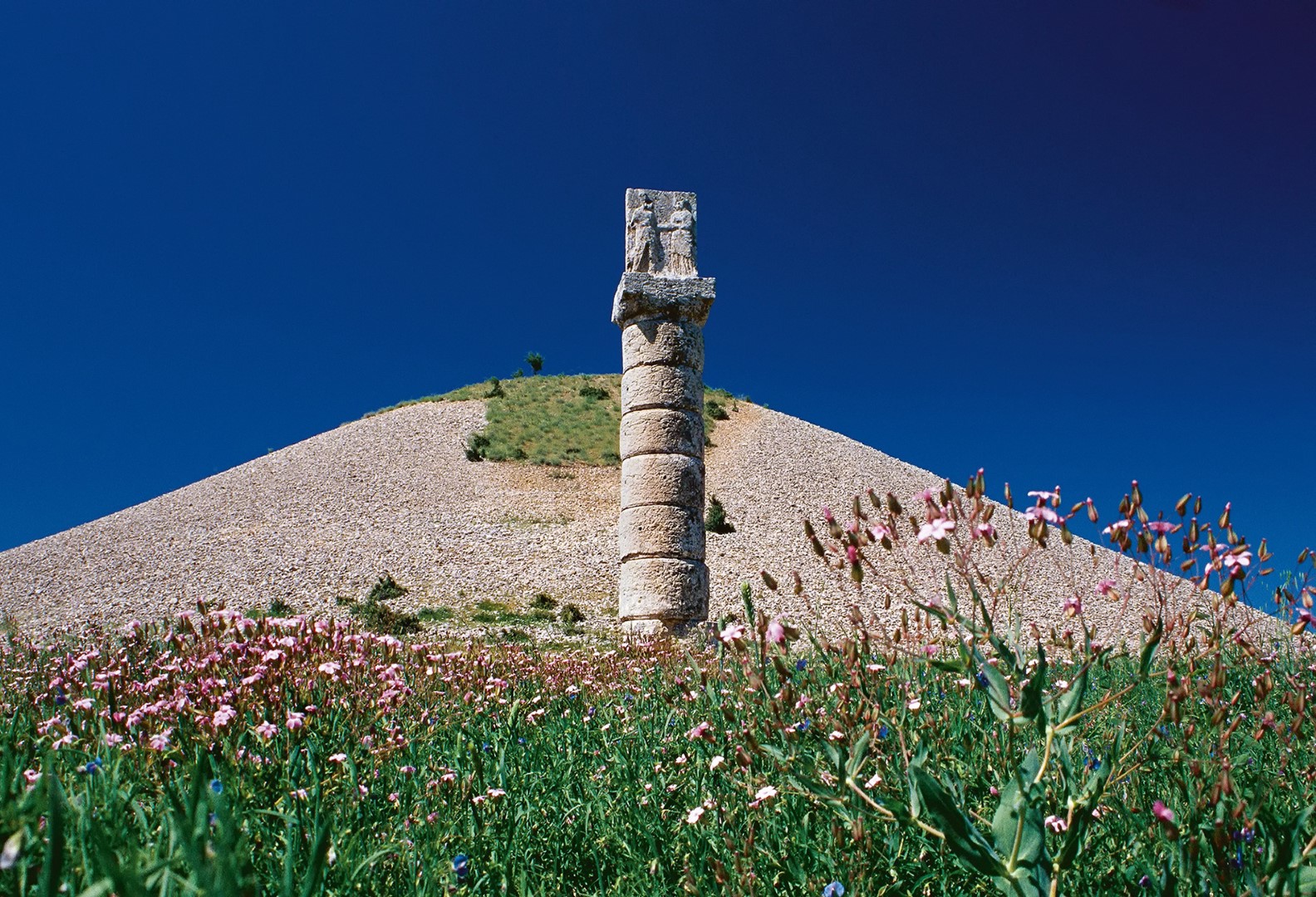 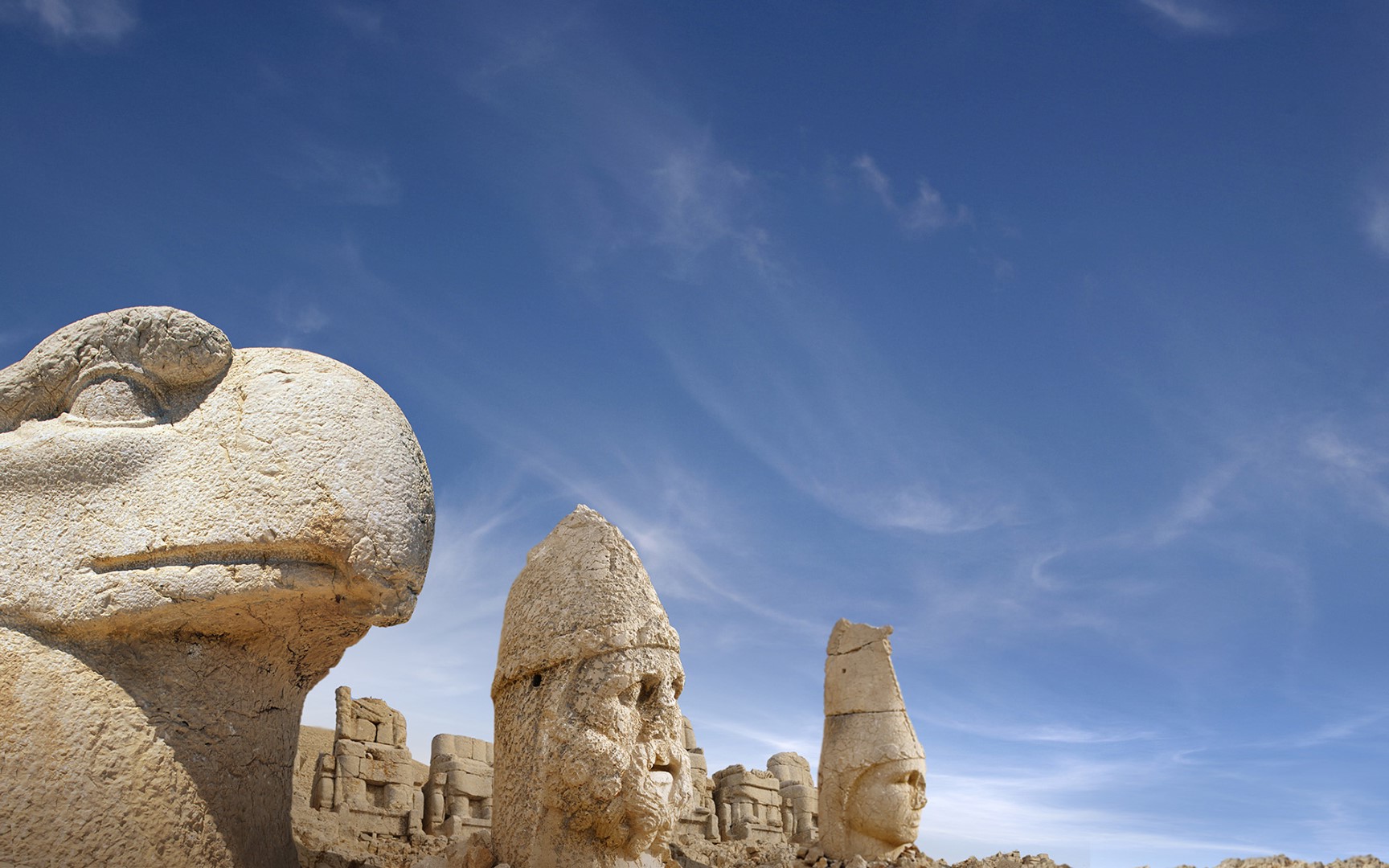 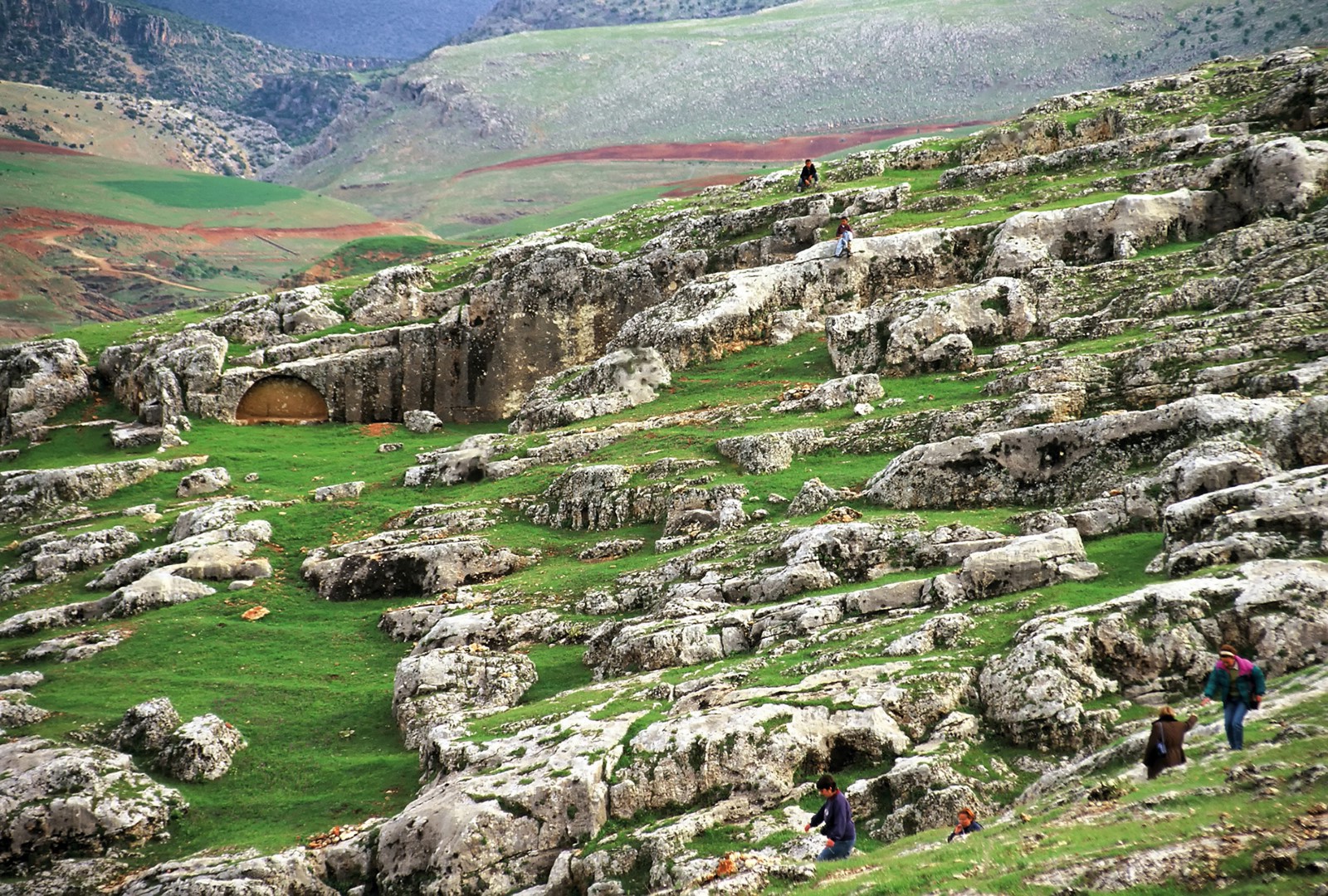 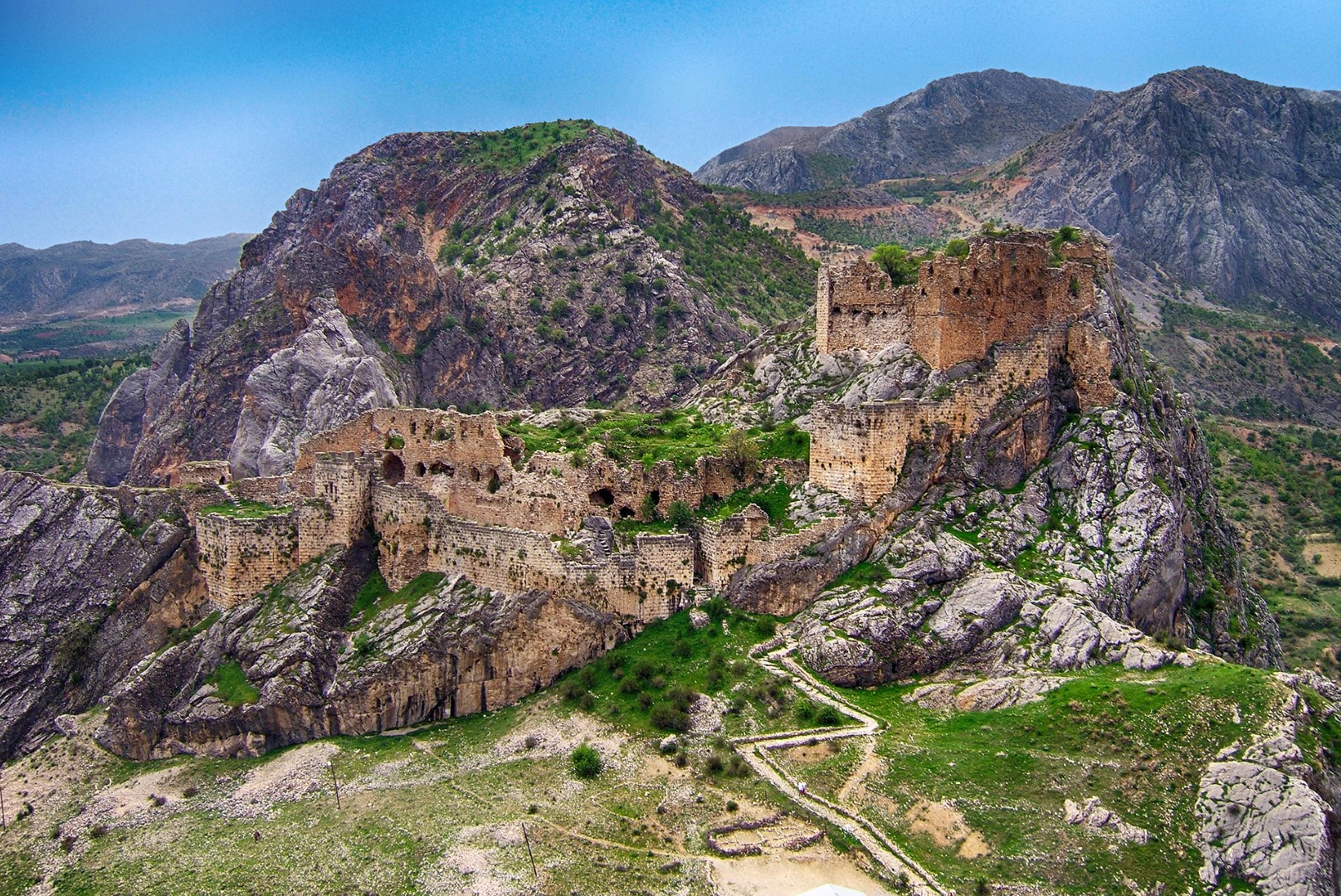 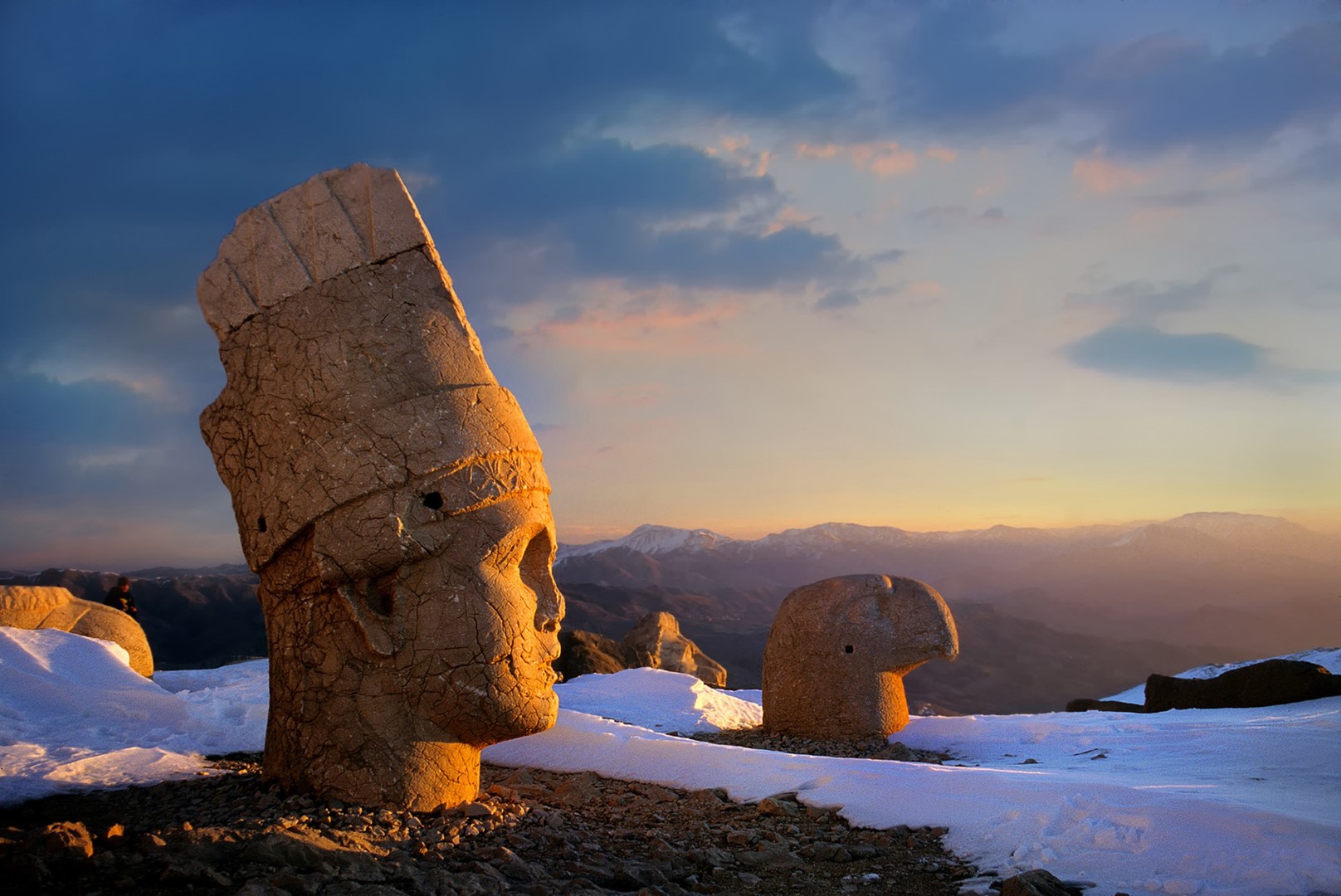 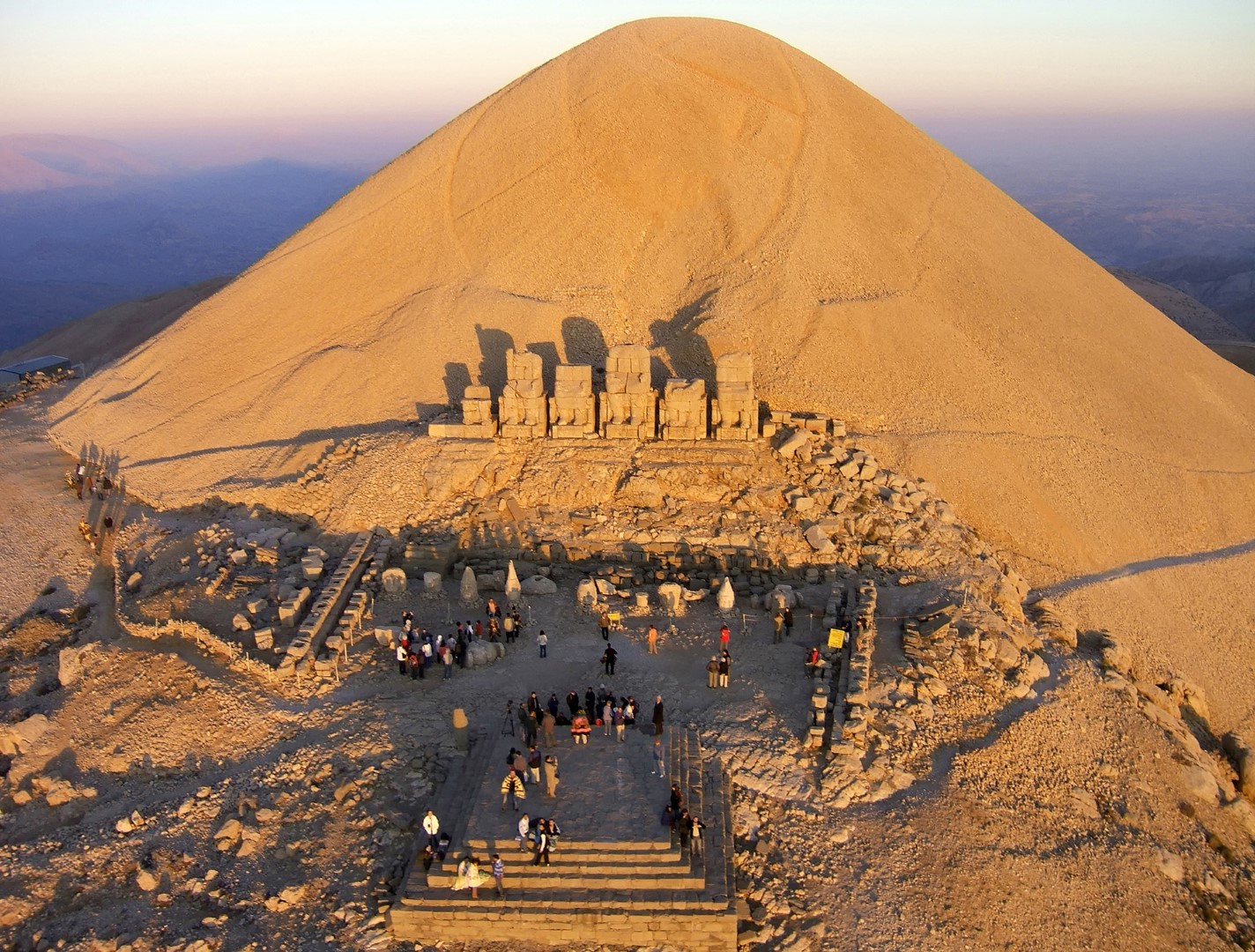 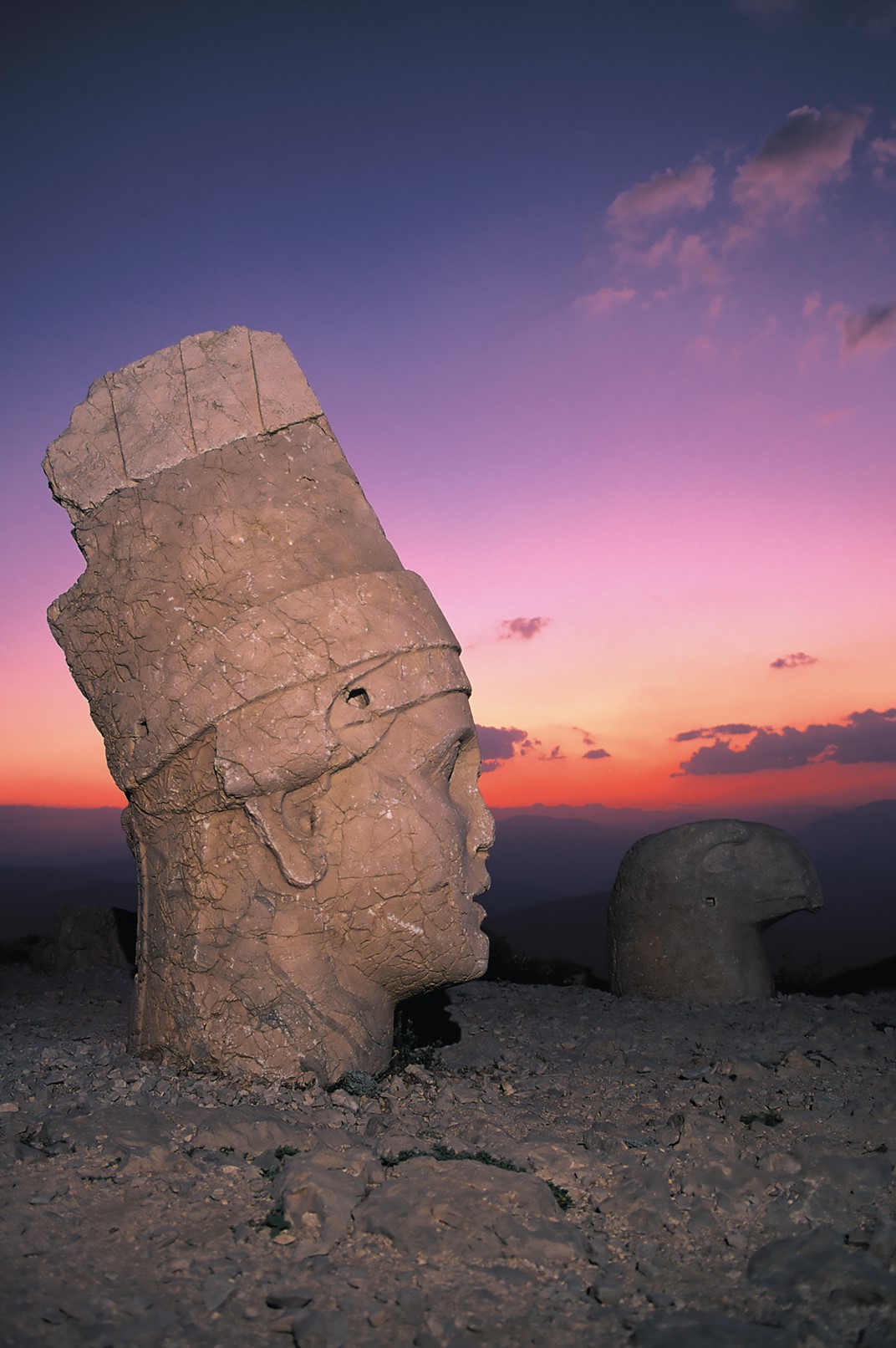 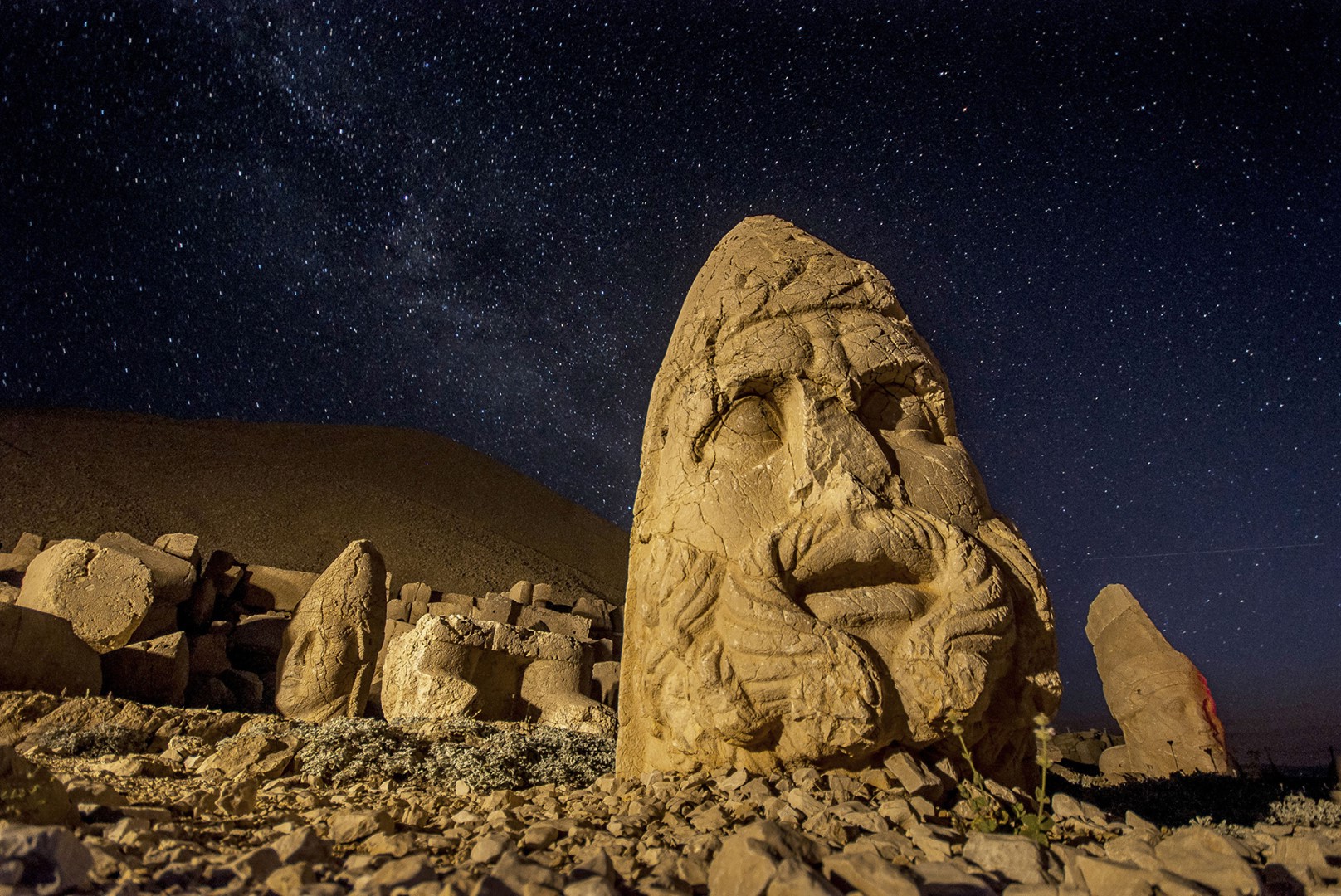