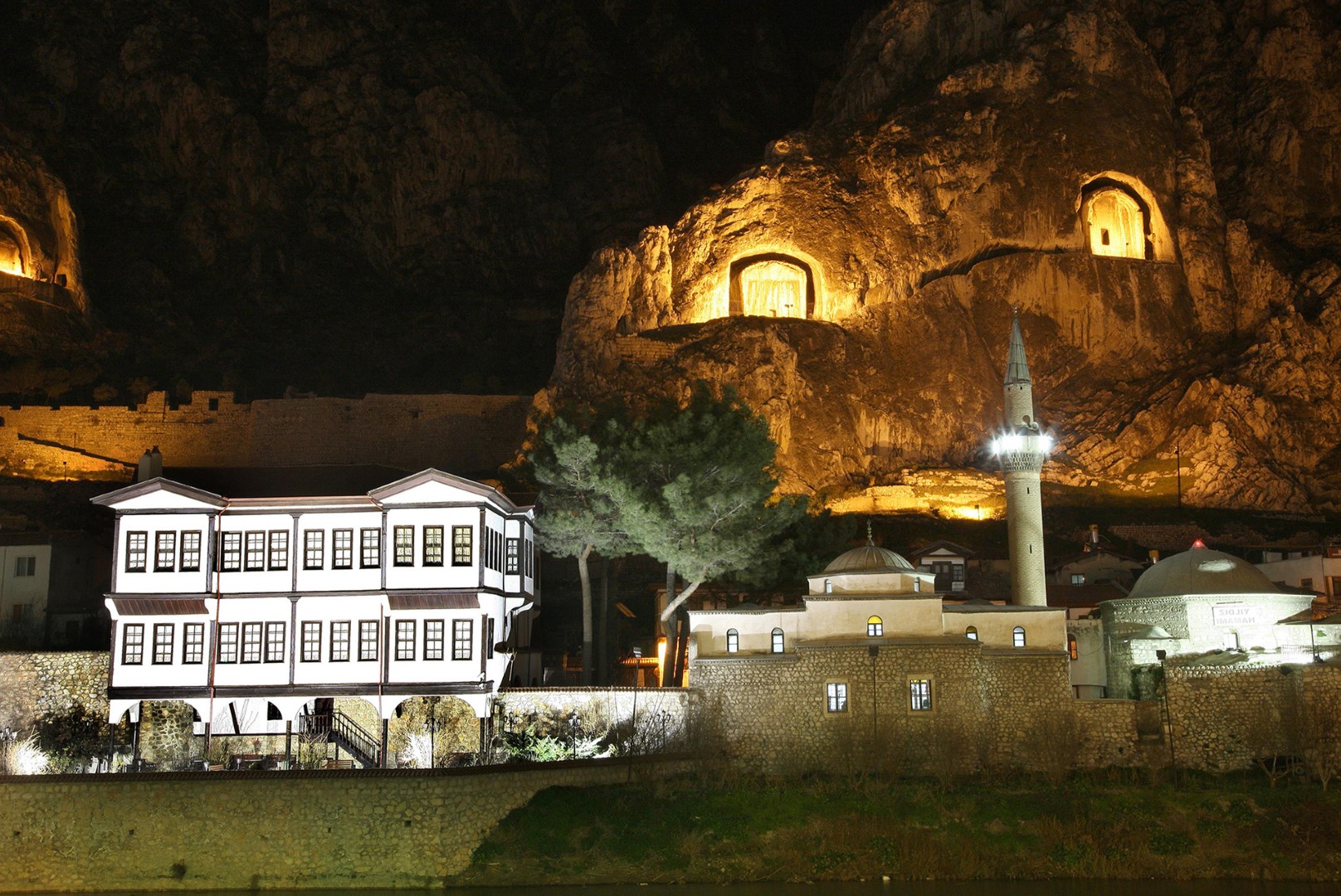 The city where the legacy of Ottoman Sultans stays engraved offers magnificent traces of past civilizations and the most delicious apples on Earth.

Set in a narrow gorge in the Yeşilırmak River, Amasya dates from 6500 BC. During the Ottoman period, the city became an important cultural centre where many scientists and sultans’ sons were raised. Accordingly, it was adorned with many buildings by the Ottoman sultans. It is still possible though for visitors to observe the Amasya heritage of earlier civilizations there. The ruins of the castle rise from the craggy rock and contain an Ottoman palace and a secret underground passageway, while hewn into the rock face above the city are impressive rock tombs that are illuminated at night creating a spectacular sight.

The beauty of the natural surroundings and the splendid architectural legacy combine to endow the city with the accolade of being one of the most beautiful cities in Turkey. Further sights of interest for visitors in Amasya are the 13th-century Seljuk Burmalı Minare Mosque, the Torumtay Tomb, the Gökmedrese Mosque, the 14th century İlhanid Hospital with lovely reliefs around its portal, the 15th century Beyazıt II Mosque complex and the unusual octagonal Kapı Ağa Madrasah.

“Steeped in history 8500 years ago, Amasya surprises visitors with stories of love.”

Traditional Turkish wooden mansions, or konaks, on the north bank of the Yeşilırmak River in the Hatuniye quarter (Yalıboyu) have been restored to Steeped in history 8500 years ago, Amasya surprises visitors with stories of love their former splendour, with some of these having been turned into guesthouses. The restored 19th-century Hazeranlar Konağı, one of the loveliest, now houses an art gallery on the first floor and the Ethnography Museum on the second. The Archaeology Museum has an interesting collection of regional artefacts including mummies of the İlhanid Mongol rulers of Amasya. Cafes, restaurants, tea gardens and parks line the riverside and provide tranquil spots where visitors can enjoy the city&39;s romantic atmosphere. From the top of Çakallar Hill you can drink in the beautiful view of the city.

There are many excellent places for relaxation near Amasya. Set amid magnificent mountain scenery, Borabay Mountain Lake is one such popular place for day trips; it is 63km northeast of Amasya, at an elevation of 1050m. Yedi Kuğular Kuş Cenneti (Seven Swans Bird Heaven) is a refuge for migratory birds, 32km from Amasya, while Terziköy Thermal Spring, with hotel and motel facilities, is 36km further. The small county of Merzifon, 49km northwest of Amasya, has several Ottoman monuments, including the 15th-century Çelebi Sultan Mehmet Madrasah (theological college) and the 17th-century Kara Mustafa Paşa Mosque. There are also sights worth seeing in Gümüşhacıköy, 22km from Merzifon, including a 19th-century bazaar, the 15th-century Haliliye Madrasah, and the Yakup Paşa, Darphane and Maden mosques.

Last, but by no means least, the entire province of Amasya is filled with orchards which produce some of the world’s most delicious apples. 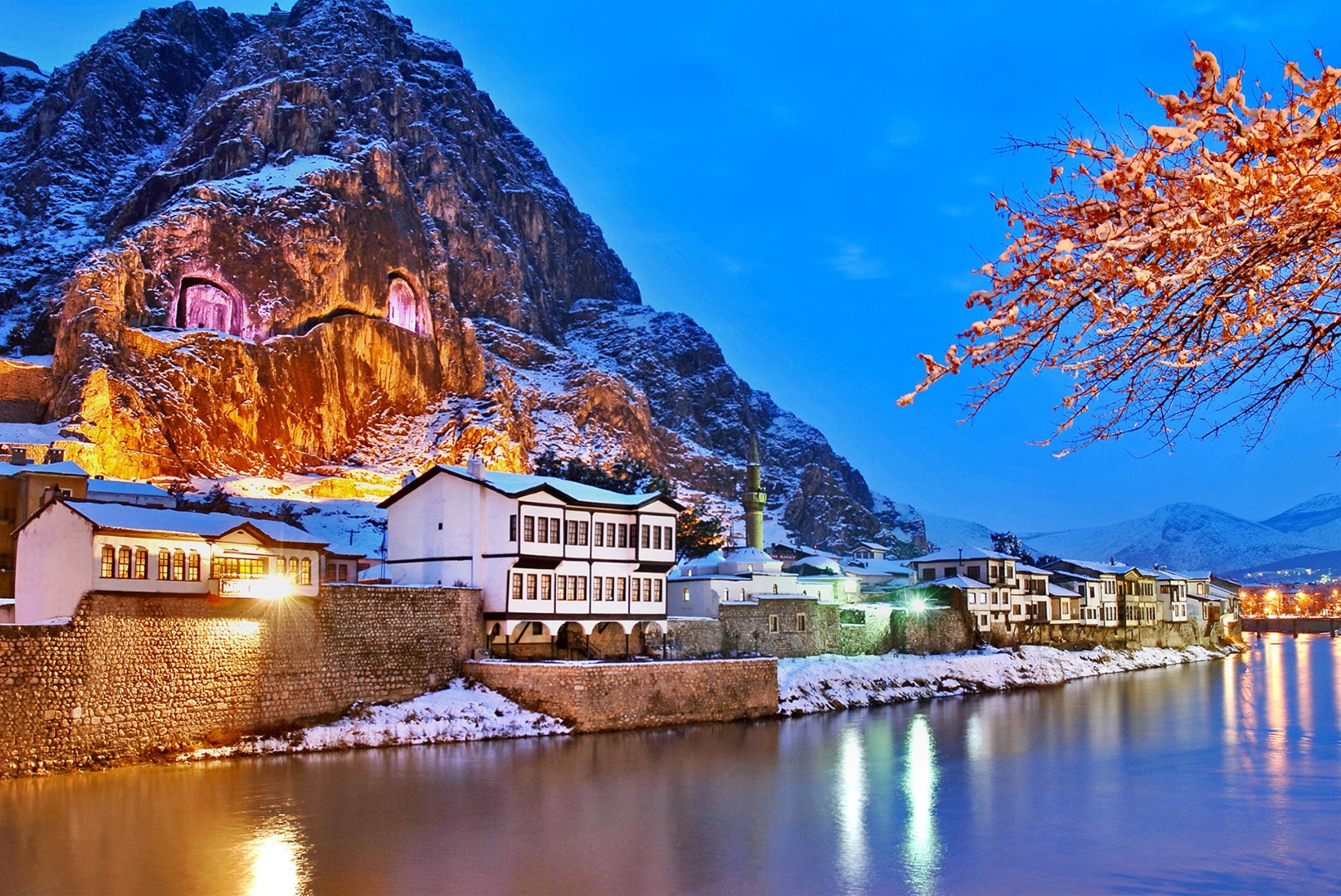 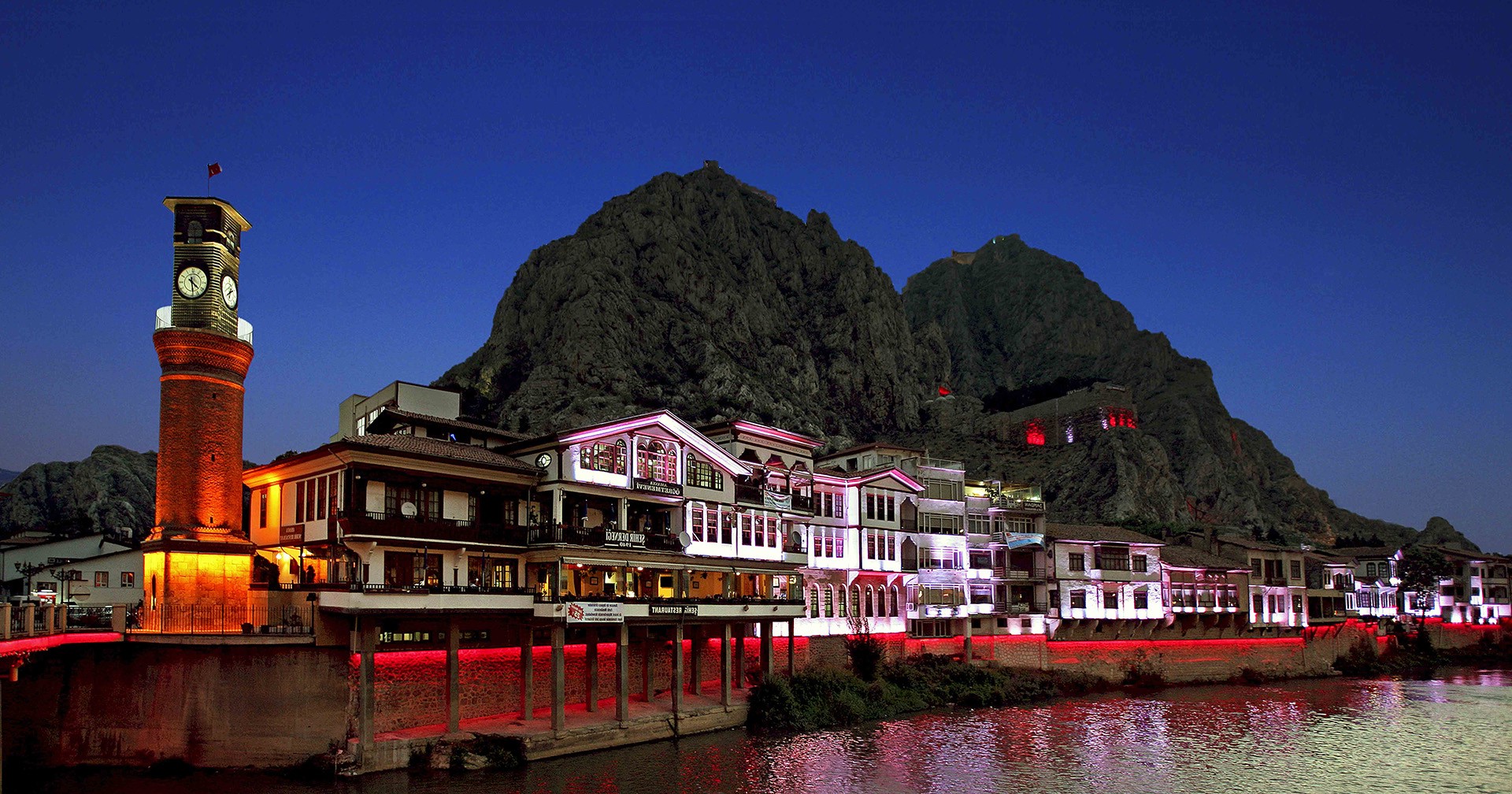 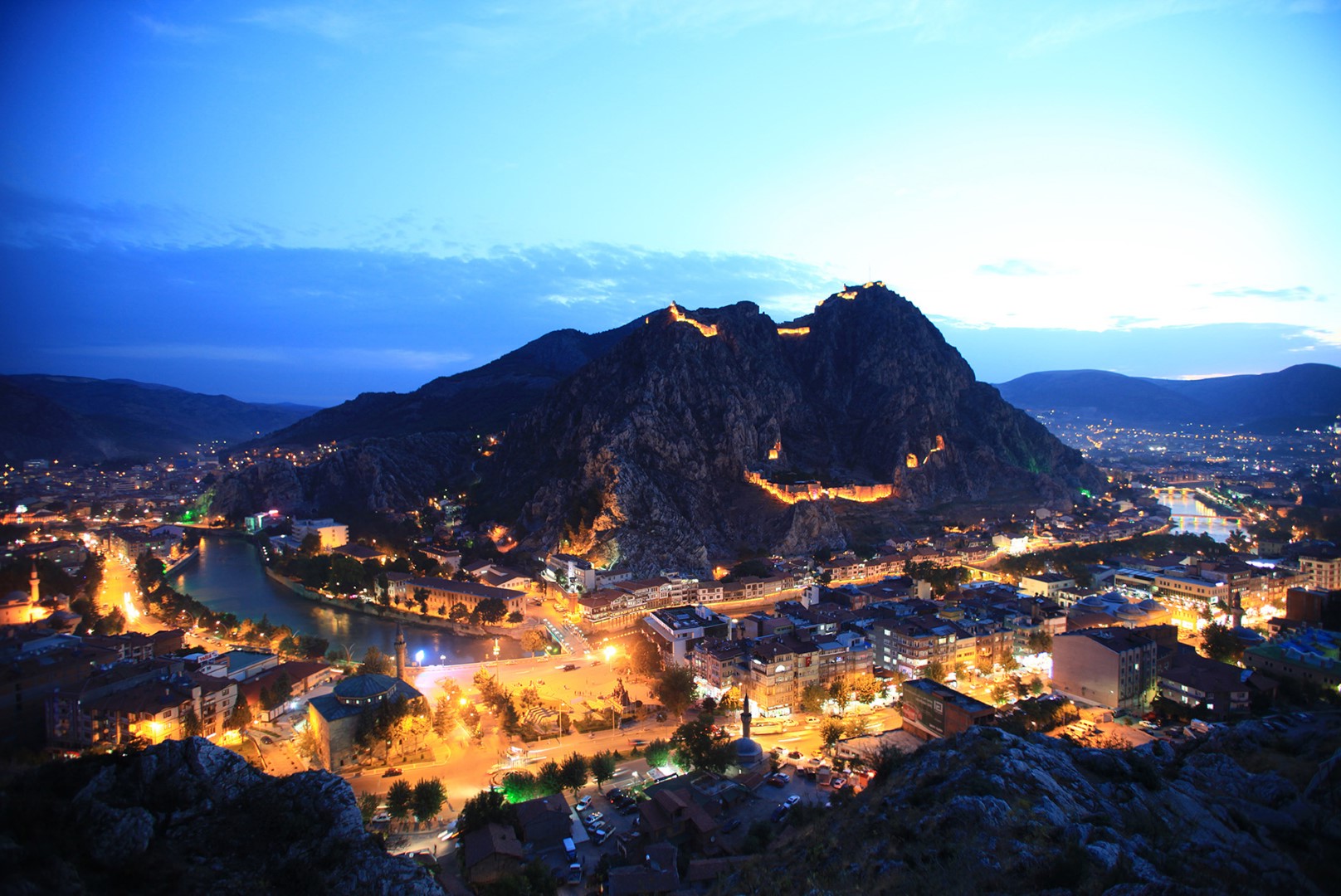 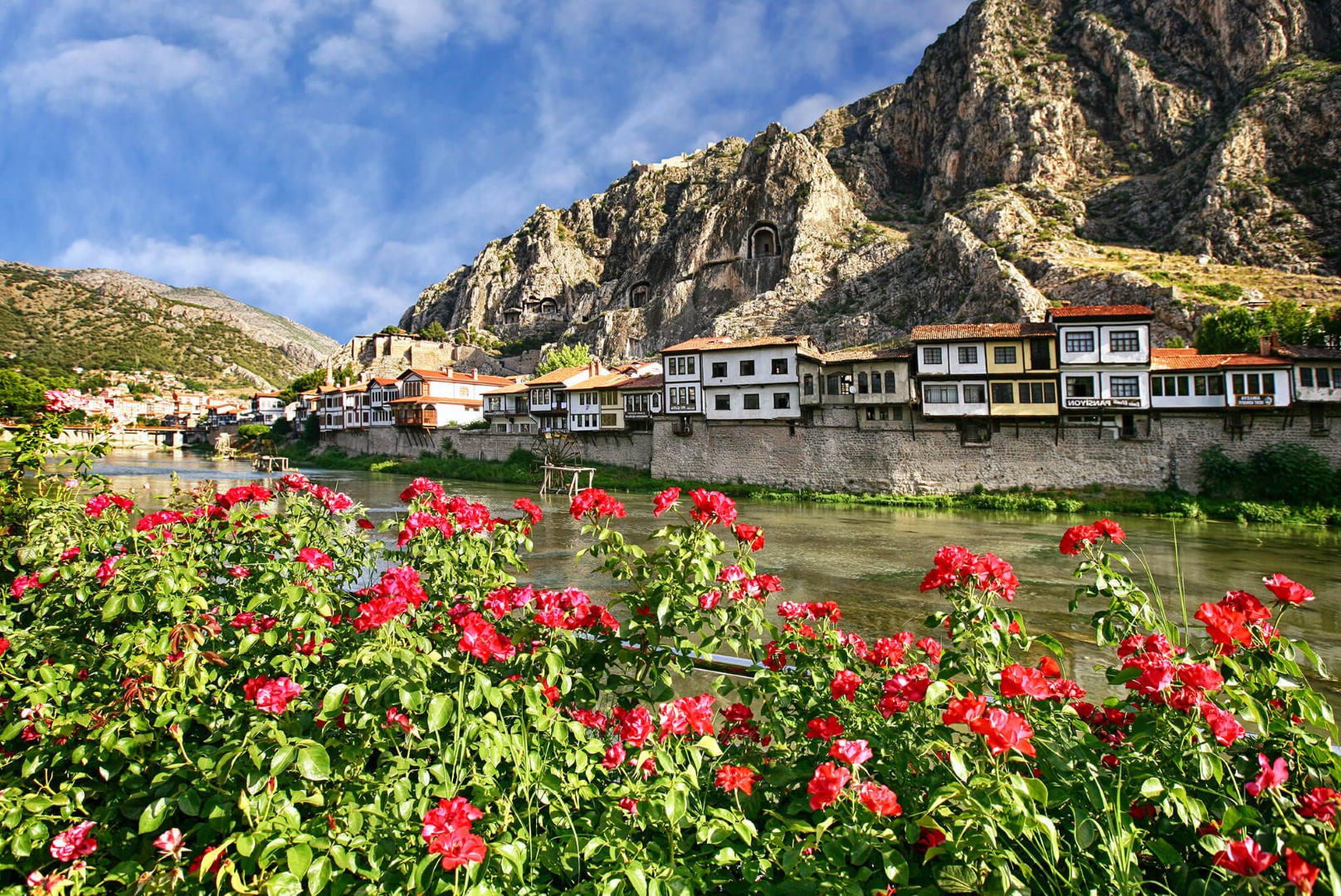 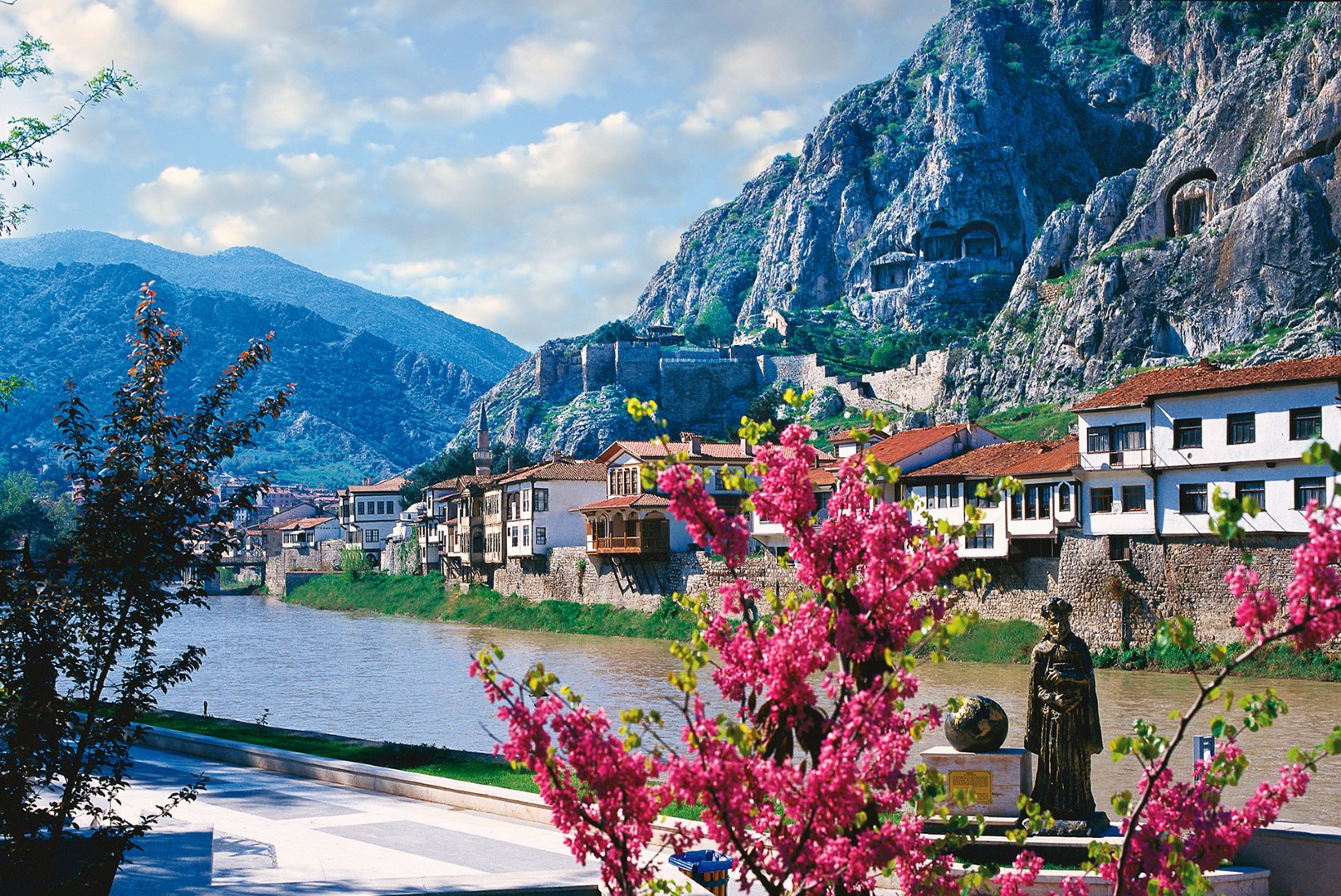 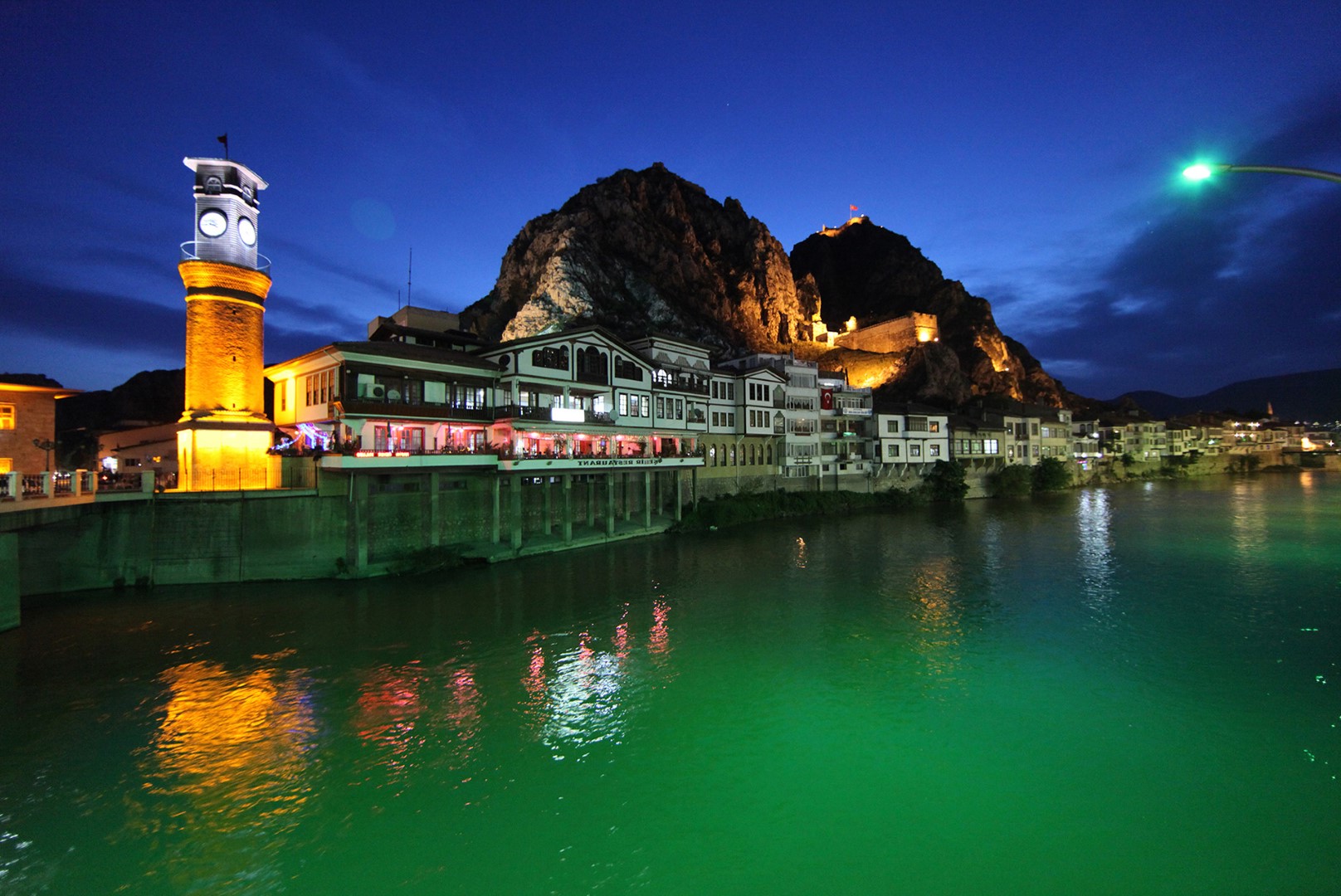 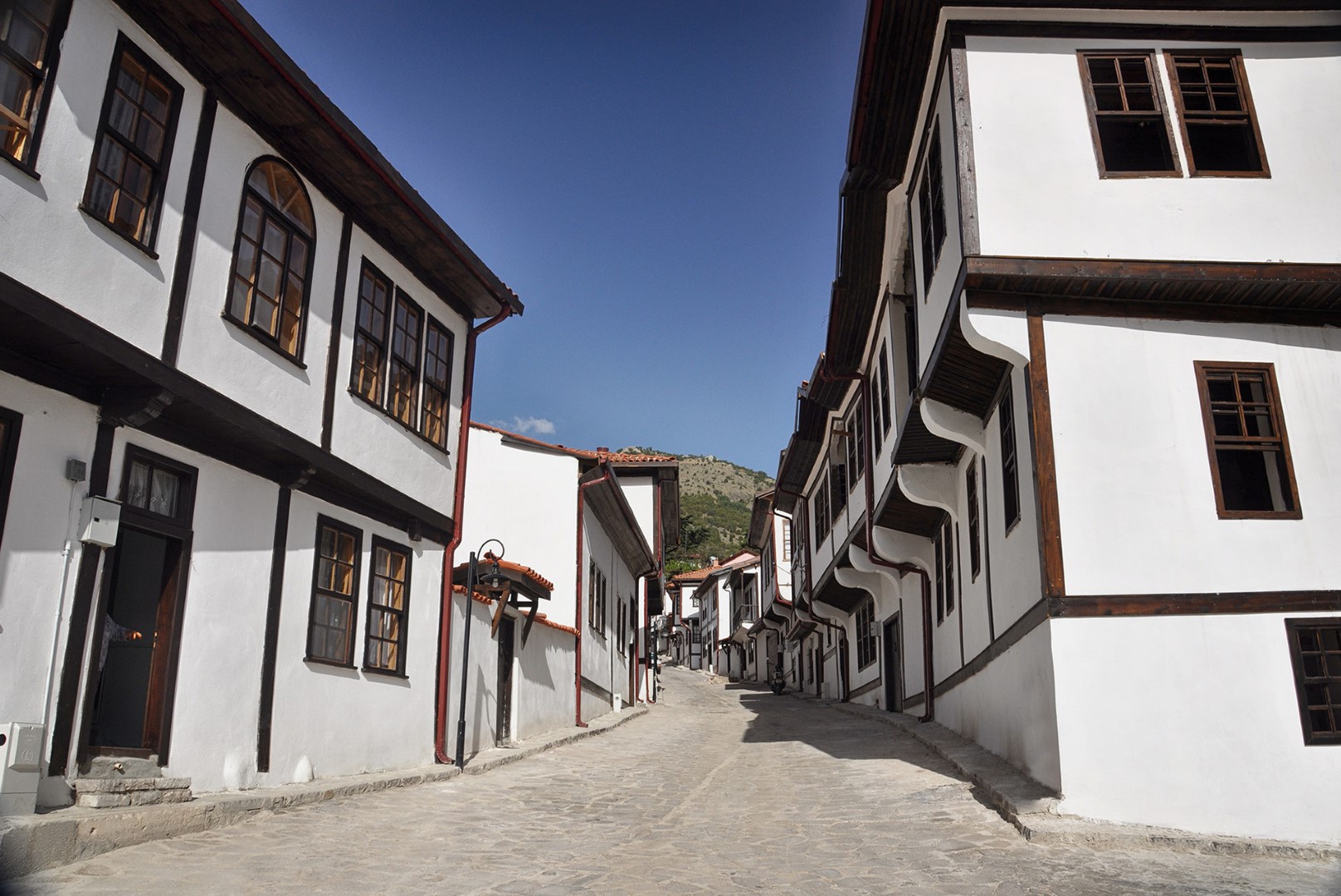 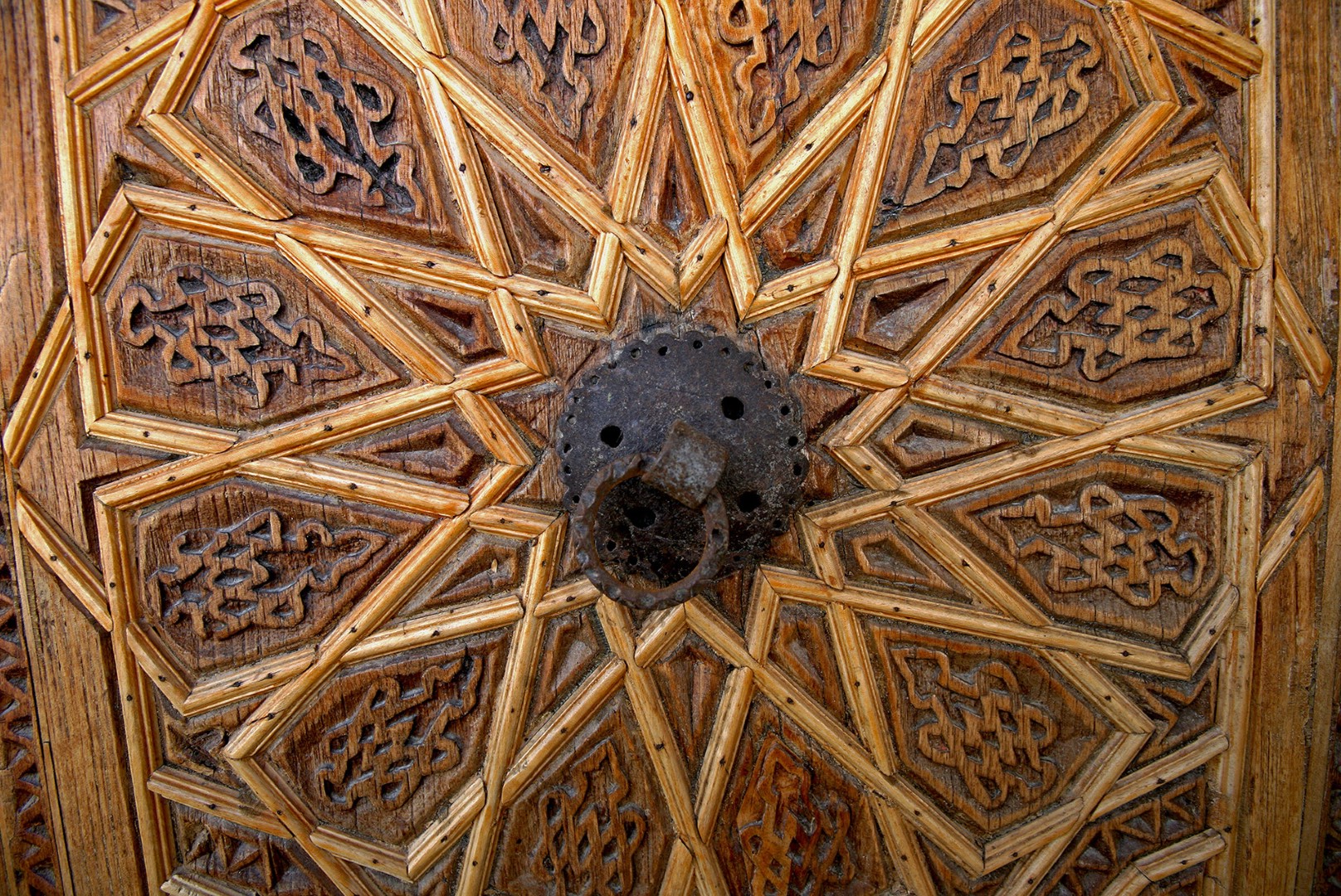 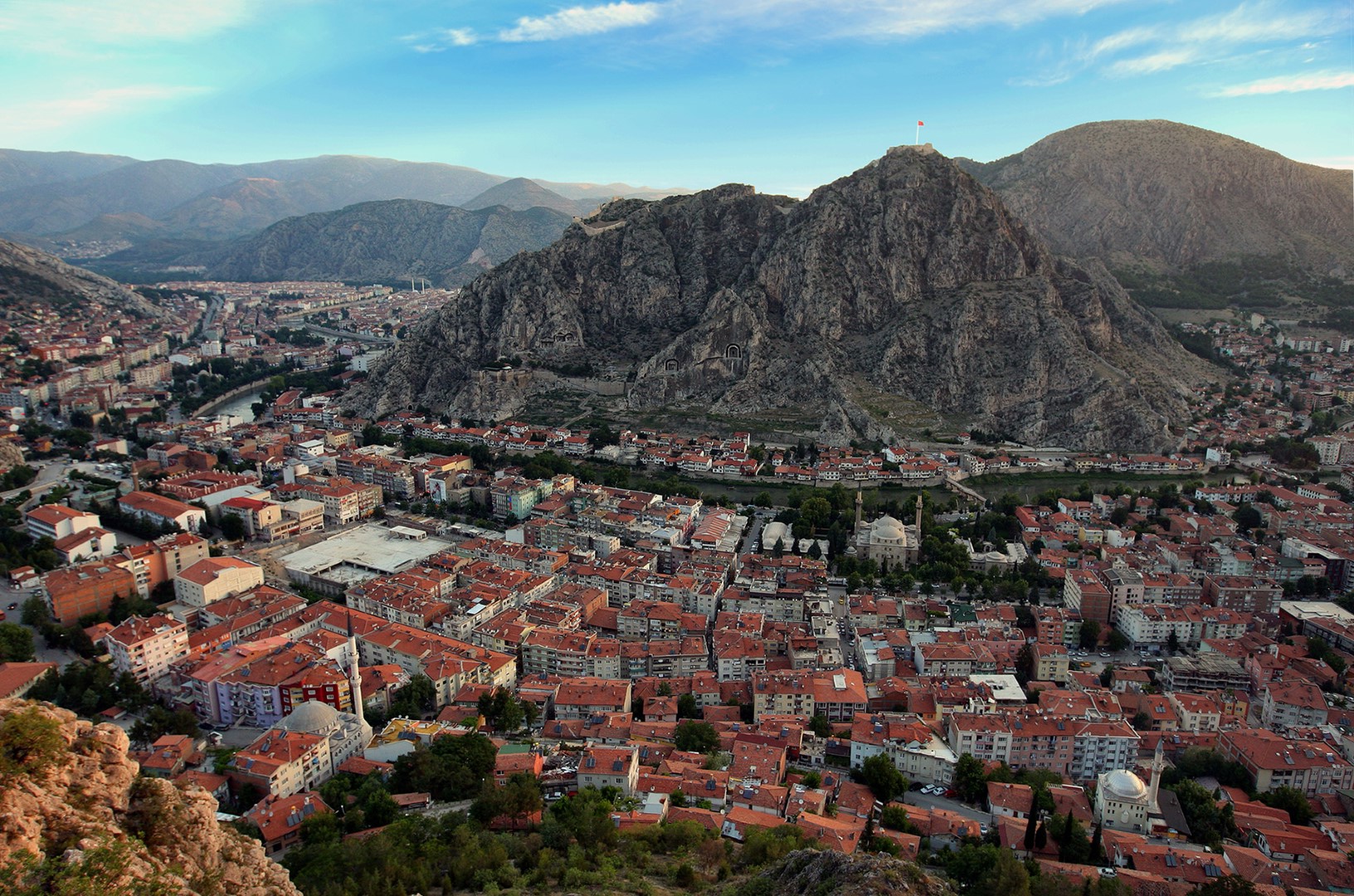 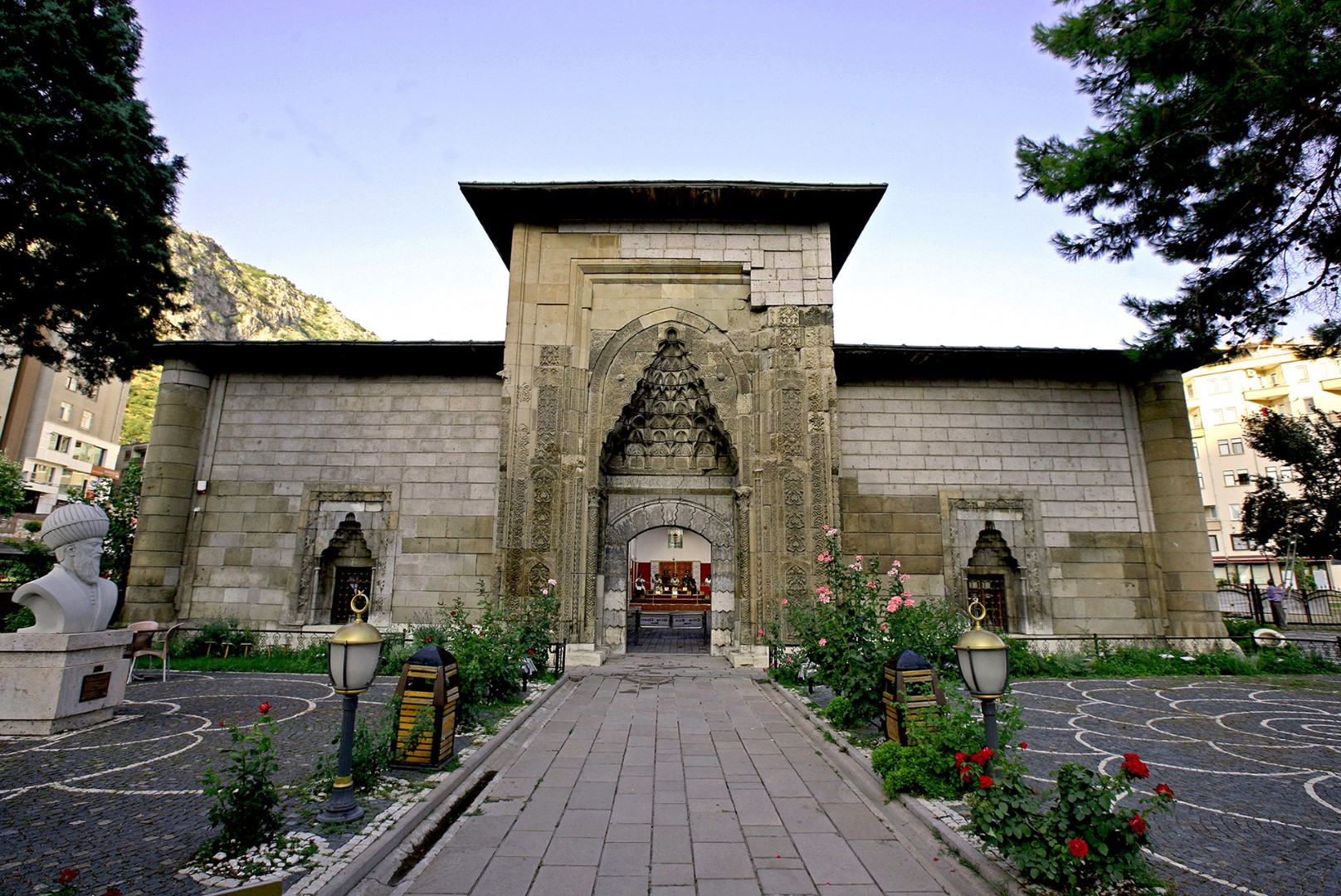