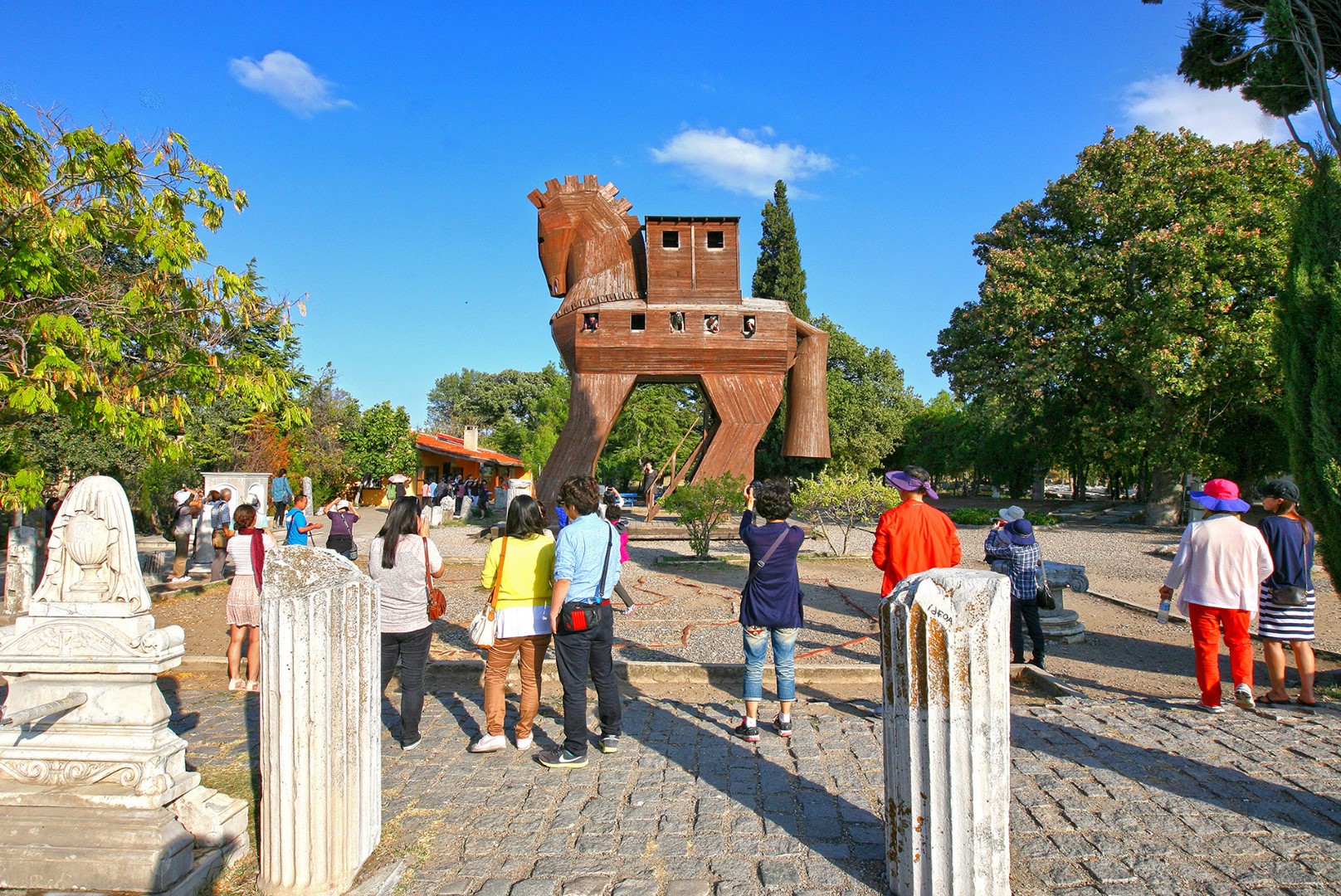 Troy is enchanting and historic place, embracing the cultural treasures of the east and the west, brought to life by the ancient epics.

2018 was declared “Year of Troy” in Culture and Tourism to celebrate the 20th anniversary of Troys addition to the UNESCO World Heritage List.

With over five thousand years of history, Troy has been a fertile source of inspiration for bards and poets, and has gained immortality in the imagination of those who have read her story.

This timeless story, which weaves together themes of power, victory and love, has attracted people for hundreds of years and the many civilisations acquainted with the Troy have been enriched by the descriptions of the legendary Trojan heroes and their exploits.

Troy, which forms a priceless part of the UNESCO World Cultural Heritage List, welcomes visitors to be inspired by her magical history and precious archaeological finds.

The ancient city of Troy is situated some 30 kms from Çanakkale, near Tevfikiye village in İntepe. Known in history as Troas, the history of Çanakkale region as a place of settlement goes back to 5000 BC (Late Neolithic Age). It spreads over an area of 9737 km2 and its coastline is 671 km long.

Geographically, Troy is set at a strategic point, at the crossroads of two continents where trade routes converge. The significance of Troy is not due only to the value of the archaeological finds discovered here, but also to the skill of Homer, the famous bard from İzmir, who immortalized Troy in “The Iliad”. This epic story has proved to have a lasting attraction throughout the ages.

Priam was the patriotic king of rich and prosperous Troy. The strategic importance of his country’s location made it all the more desirable to the colonies. Paris, King Priam&39;s son, was asked by the God, Zeus, to be the judge at the world’s first beauty contest set on Mt. Ida. Aphrodite, Hera and Athena were to be the contestants.

Each of these goddesses offered him a bribe to be chosen as the most beautiful. Hera promised to make him Lord of Europe and Asia; Athena, that he would lead the Trojans to victory against the Achaeans; and Aphrodite, that the fairest woman in the world would be his. Paris chose Aphrodite and awarded her the coveted golden apple. He then travelled directly to Sparta to see Helen, the fairest woman in the world.

Upon seeing Helen, the wife of Menelaus, Paris fell in love with her, and she with him and they eloped together for troy.

Menelaus, supposing that Helen had been abducted by Paris, set off to Troy to take her back with a huge army consisting of hundreds of fleets. This was the cause of the Trojan War, which continued for ten years.

King Agamemnnon was in command of the colonie, which had been waiting for many years for the opportunity to conquer Troy.

The invincible warrior, Achilles, blessed with invulnerability in every part of his body except his heel, entered into the war with the Myrmidons to gain glory. Hector, son of King Priam, was a succesful warrior, astounding all the Achaean kings with his prowess, and a mighty commander who loved his country. Troy could not be captured due to the strength of its walls and the success of Hector, and the war continued for 9 years without any result.

Odysseus, however, understood that they could only capture Troy with the help of a clever strategy. According to his plan, the Achaeans gave the impression that they had given up fighting and were returning home, leaving behind a gigantic Wooden Horse as a gift to the Trojans. The Trojans accepted the gift supposing that it was a votive offering to the Gods and took it into the city walls. The warriors, hidden inside the wooden horse, got out of it at night whilst the inhabitants of the city were asleep and opened the city gate to let the other warriors inside. Thus, they captured Troy and looted the city.

Heinrich Schliemann, who had grown up with the fascinating stories of Troy, began excavations to realize his dream of finding Homer’s Troy on the hills of Hisarlık in Çanakkale in 1871. Following his dream of locating the magnificent treasures of King Priam’s Troyi Schliemann caused extensive damage during his excavations. He also took the priceless artefacts, which he discovered, out of Turkey illegally. In subsequent periods, the excavations were organized systematically and carried out by the teams of Cincinnati University under the supervision of Carl Blegen. Since 1988, the excavation work has been continued by an international team consisting of many archaeologists under the supervision of Prof. Dr. Manfred Korfmann from the University of Tübingen. Restoration work is still being carried out, as well as geophysical and topographic work.

The ancient city of Troy, which has great significance for European history and literature, was declared a Historic National Park with the approval of the relevant Turkish Ministries and added to the World Cultural Heritage List by UNESCO in 1996.

The excavations, carried out in the ancient city of Troy, have brought to light the fact that the first settlement goes back to 3000 BC.

Troy is a 16-meter high settlement mound, like those seen in Anatolia, in the whole of south-western Asia and in the southeast. Due to the convenience of its location, the hill was settled by various civilizations at different times. Excavations have revealed a total of 9 periods of settlement in this ancient city, which was established 5 thousand years ago.

Troy I dates back to 3000-2500 BC, and it is regarded as Early Middle and Late Troy I. The east tower of the city gate of the walls has been renovated to a large extent and it is in good condition. There is a house, know as one of the oldest megaron type of houses, which is constructed to a long and narrow shaped plan, and consists of a portico and a large room with a hearth at the centre of it. In Troy I, the walls were built in a herringbone pattern, which is peculiar to this period and copper and bronze were used to make tools.

Troy II consists of 7 layers piled on top of one another. Each of them has city walls. Wheel-made pottery is seen in this period. Moreover, attractive jewellery made of gold, silver, and electrum, various ornaments and cup forms were found. Archaeological finds reveal that no important progress was made during the settlement period of Troy III when compared to the other settlement periods of Troy.

Troy IV and V date back to 2200-1800 BC. Ruins of houses and walls were found in this settlement period. The existence of ceramic artefacts of the early Hellas period indicates that there was a commercial relationship between Troy and the ancient City States on today’s Greek land.

Imported Mycenaean and Cypriot cups, seen in the settlement period of Troy VI, were also discovered in Troy VII.

Troy VII is likely to be King Priam’s Troy where the Trojan War broke out. Traces of a huge fire are seen in this period.

The excavations, carried out in this settlement period, revealed the magnificent Temple of Athena and remnants of two altars.

Troy IX was built during the Roman Period. The theatre, remnants of a building with mosaic tile to the fore and Bouleuterion of this period are quite impressive.

Scientific research has shown that culturally Troy was an Anatolian civilization.

Schliemann turned his dreams into reality; however, he destroyed much of Troy as a result of the unsystematic excavations which he carried out. He also took many of Troy’s precious artefacts out of Anatolia illegaly to the German city of Berlin.

After the 2nd World War, the artefacts, which were on display in the Museum Fur Vor-Und Frühgeschichte until 1940, were taken awaty to Russia as war treasures. In 1993, after many years of silence, Russia admitted that the treasures of Troy were in their country.

Other finds from the ancient city of Troy were also taken out of Turkey illegally over the years and dispersed among 50 different museums. The Republic of Turkey has been endeavouring to reclaim her cultural heritage for many years in accordance with the princible of UNESCO, which is that ‘every historic treasure should remain in its native country’.

The Republic of Turkey has organized various activities to introduce the Trojan artefacts of Anatolian Culture to the world. One such activity was the exhibition, “Troy-Dreams and Reality”, organized by Turkey and Germany in 2001 as a cultural and scientific co-operation. The artefacts carefully selected from the collections of 12 museums in Turkey, were sent to Germany for the exhibition. Hundreds of thousands of people saw these artefacts, and were introduced to the culture of which they are a product.

Although excavations in the Historic National Park of Troy are continuing, it is still possible to visit Troy. You can observe the excavations, and see the archaeological remains in their unique geographic location.

Archaeological finds, unearthed at the systematic excavation of Troy, are on display in the Museum of Çanakkale and the İstanbul Archaeological Museum, and these museums are an excellent source of further information on the area and its history.

Thousands of people visit Troy each year to see the artefacts and architectural remains of the 9 settlement periods.

Just by soaking up the atmosphere of the city, you can experience the spirit of Troy, theri imagination kindled by the replica wooden horse at the site. 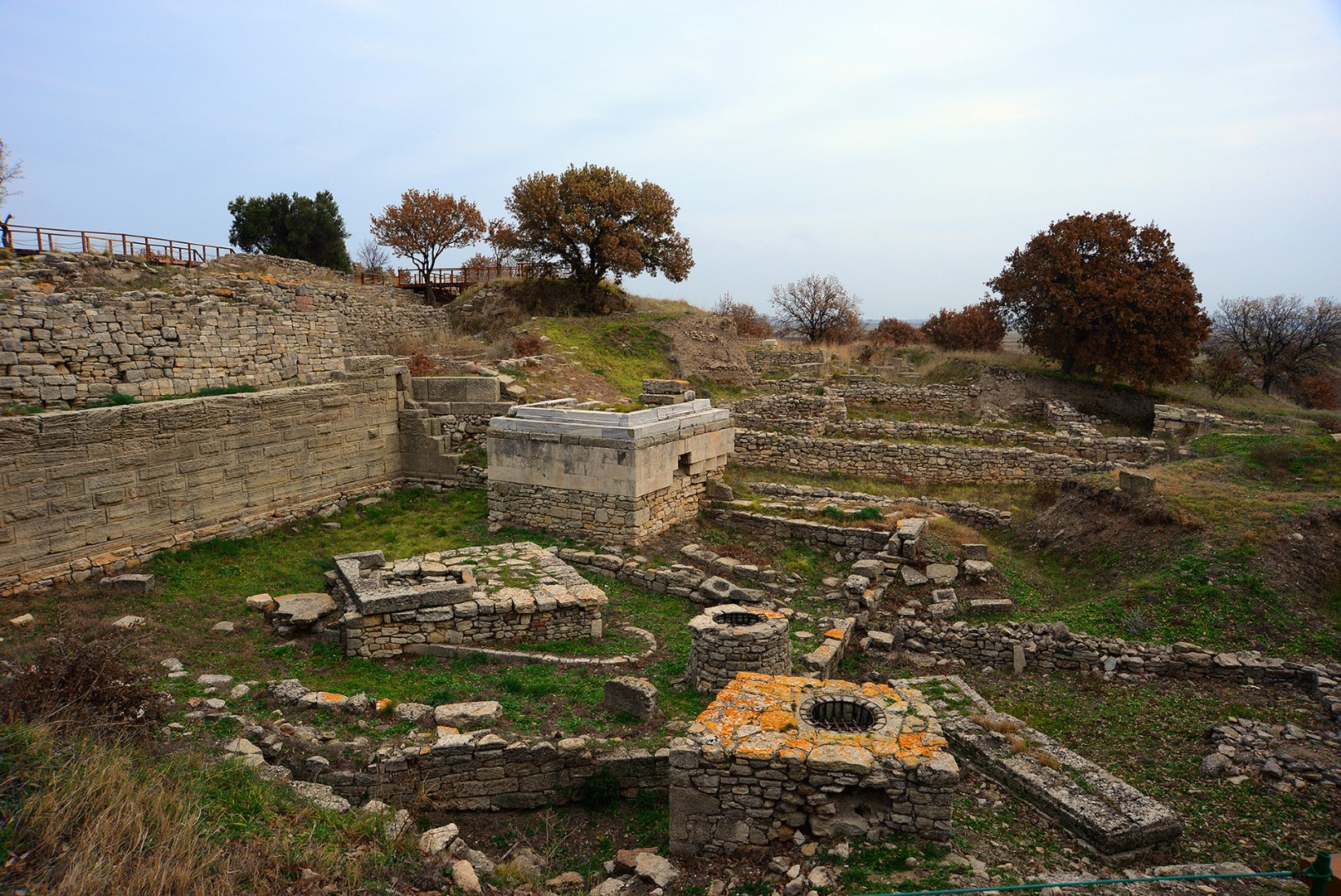 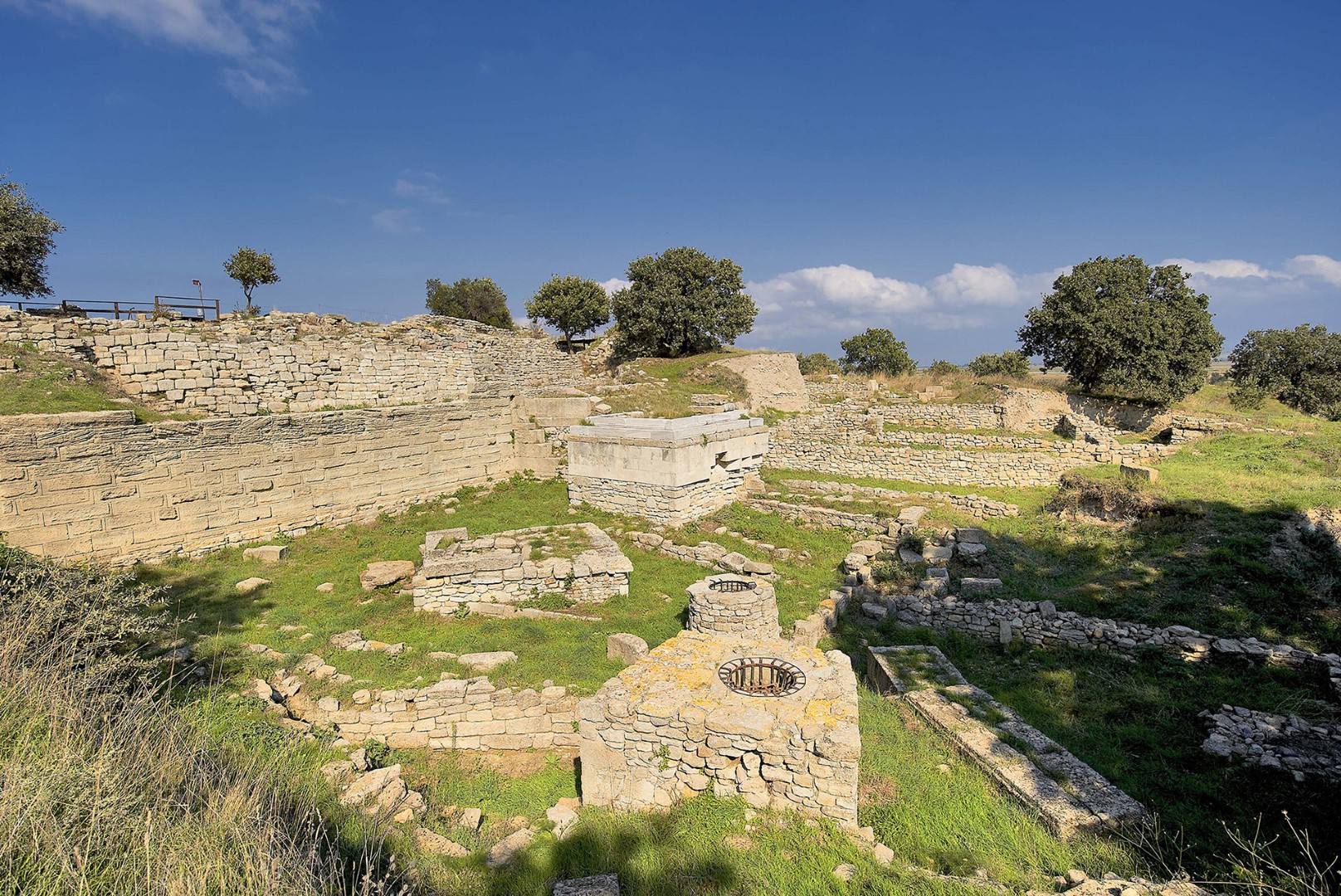 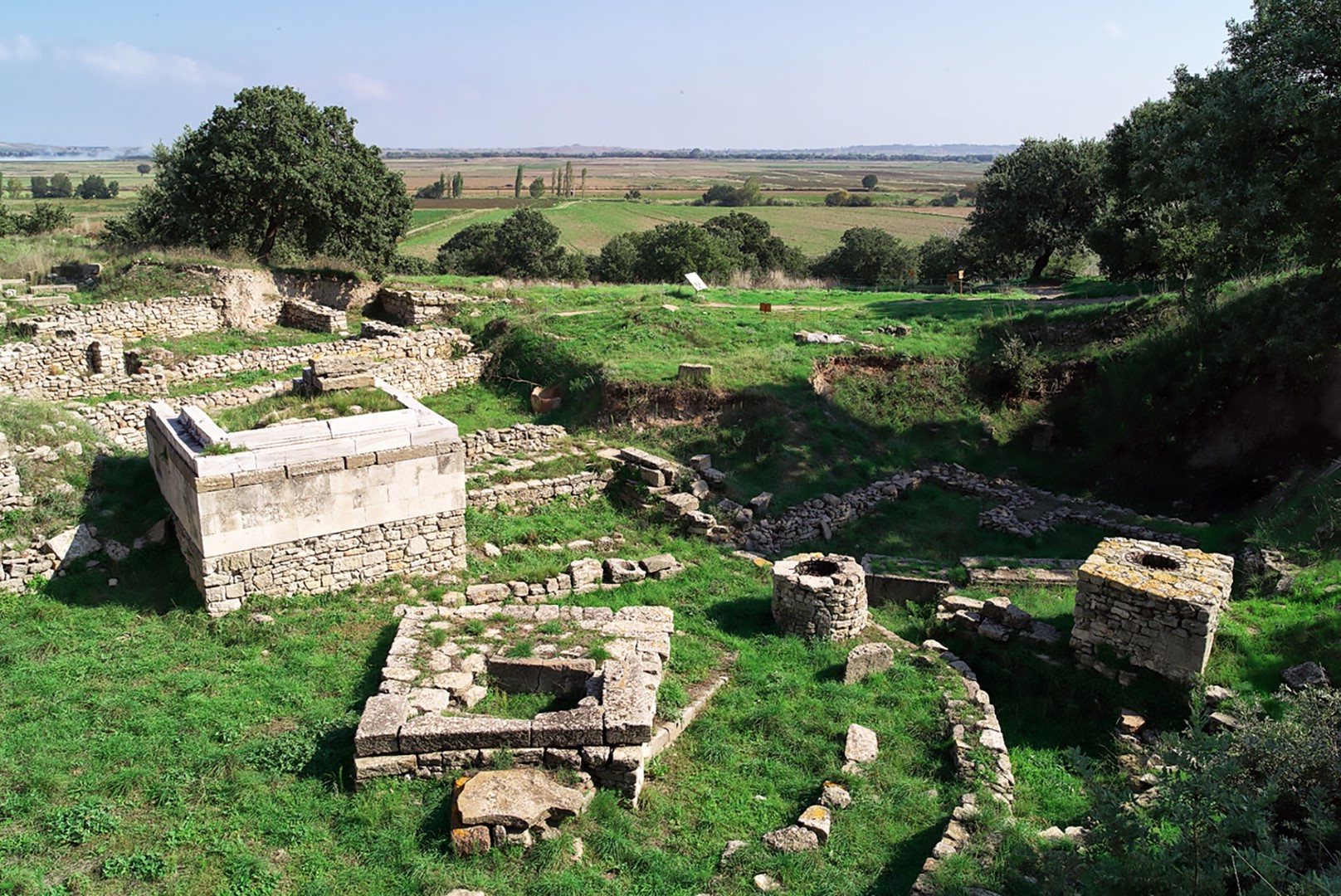 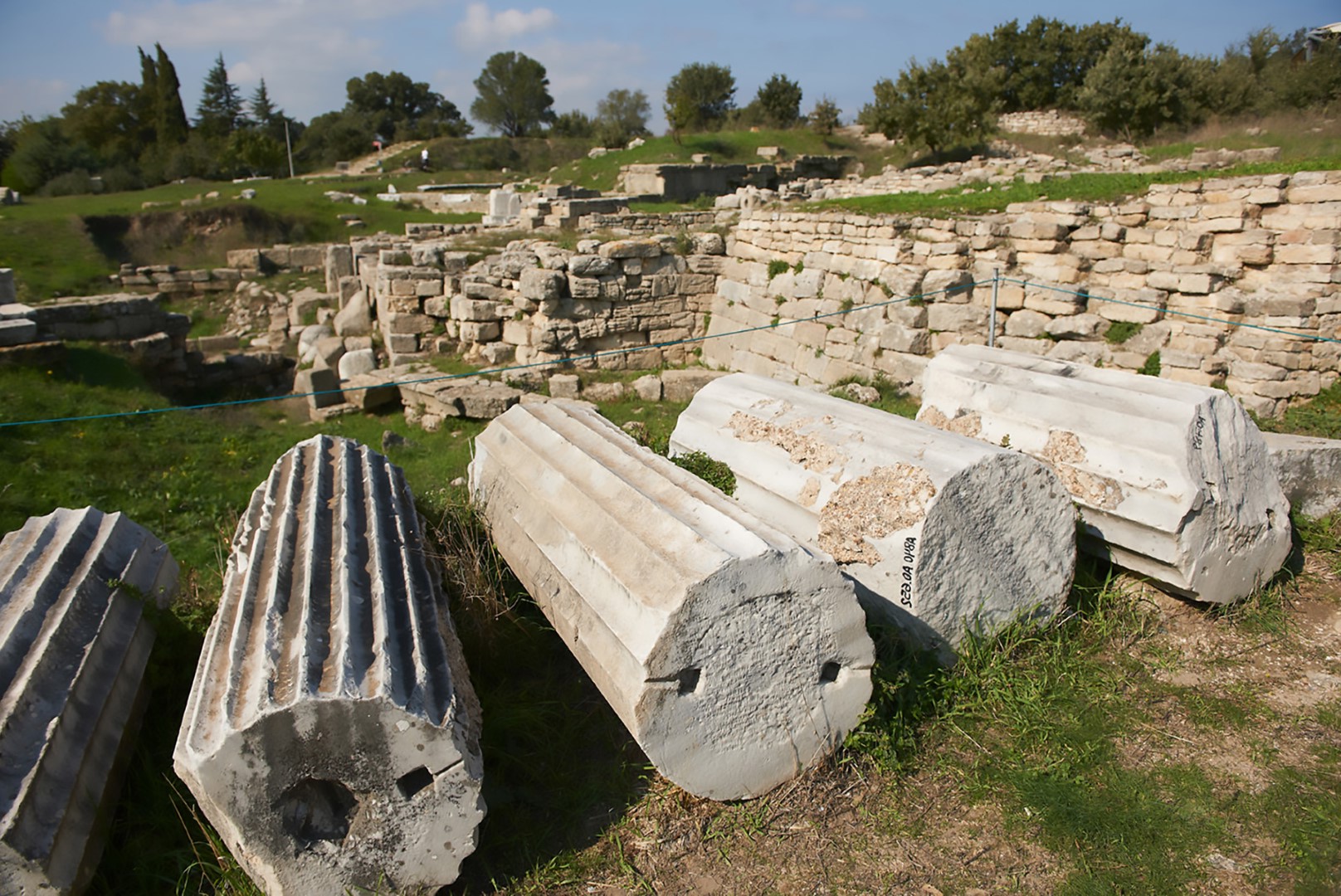 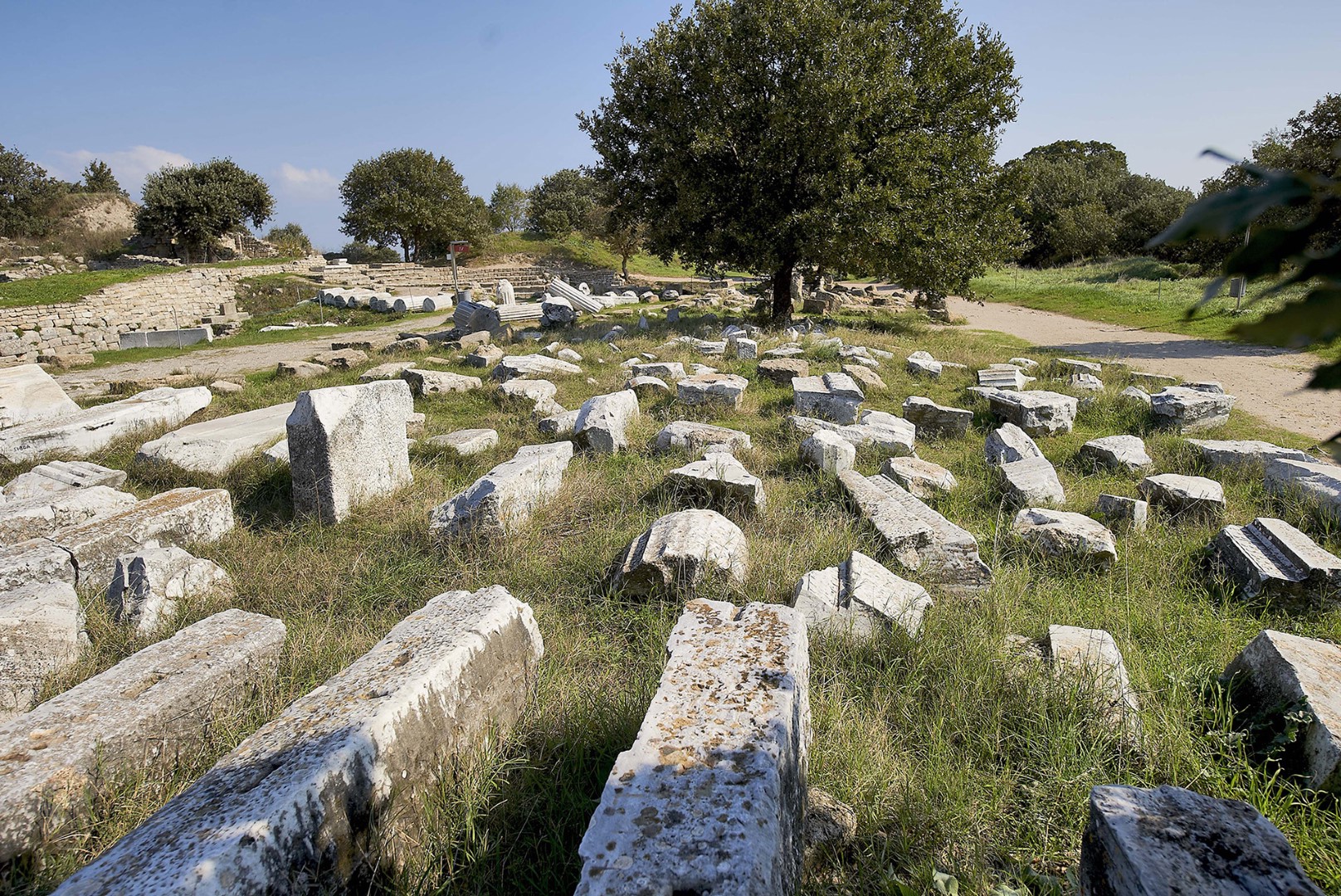 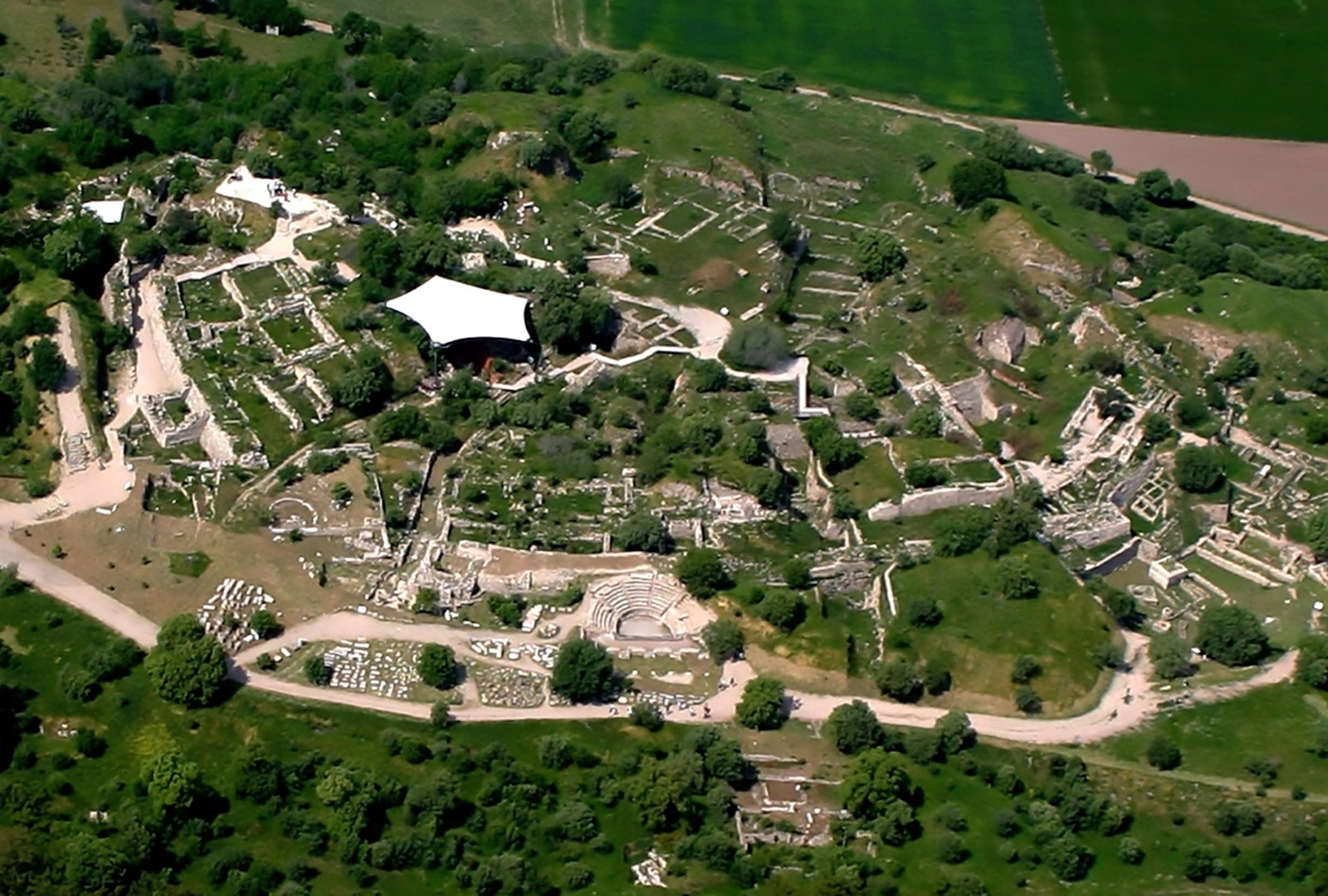 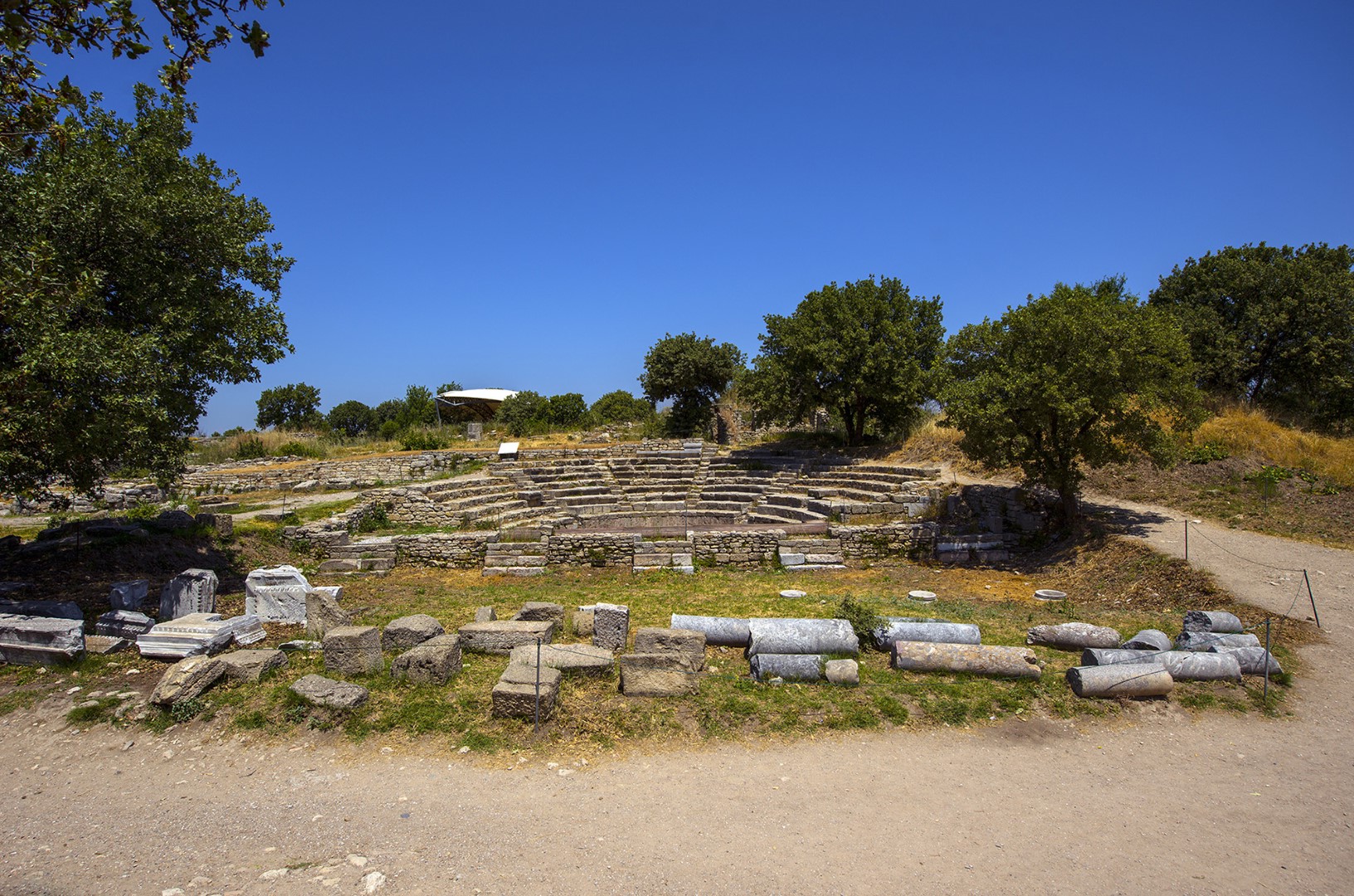